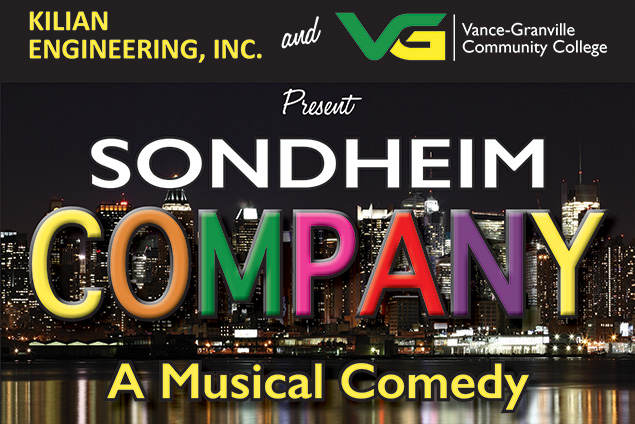 Tickets for VGCC’s Seventh Annual Dinner Theater are ON SALE NOW at the EventBrite links below. Join us as we kickoff VGCC’s 50th Anniversary celebrations with this wonderful event!

The event, once again involving the collaboration of the VGCC Drama and Culinary Arts departments, is scheduled for the evenings of Thursday April 25th and Friday April 26th, in the Civic Center on VGCC’s Main Campus in Vance County. Dinner begins at 6 p.m. each evening.

Sondheim’s musical is a sophisticated and honest look at modern adult relationships.

From musical theatre’s most renowned composer, Company is largely regarded as a trailblazer of the dark-comedy, modern-musical genre and the winner of seven Tony Awards, including Best Musical, Best Score, Best Lyrics and Best Book. On the night of his 35th birthday, confirmed bachelor, Robert, contemplates his unmarried state. Over the course of a series of dinners, drinks and even a wedding, his friends – “those good and crazy people [his] married friends” – explain the pros and cons of taking on a spouse. The habitually single Robert is forced to question his adamant retention of bachelorhood during a hilarious array of interactions.

Company features a brilliantly brisk and energetic score containing many of Stephen Sondheim’s best known songs. The strength of the piece lies in its vivid yet real characters. Every audience member will see reflection of themselves in at least one of the characters onstage.

Betsy Henderson, VGCC’s Department Chair/Instructor of Humanities and Fine Arts, is the director of the play. The wonderfully talented cast features students, alumni and community actors.

The meal will be prepared by Cook Shack Catering from Louisburg, NC with VGCC’s Culinary Program providing the Anniversary Cake.

Anniversary Cake will be served at intermission

Tickets are $30 and are on sale now at the links below. Audience members will be able to choose the table and specific seats they want at the same time that they buy their tickets online. Patrons are encouraged to purchase their tickets early in order to have the best chance of getting the seats they want for this year’s show. For the best results for reserving seats at this event, please use the Google Chrome, Mozilla Firefox, or Internet Explorer 11 web browsers.

Vance-Granville Community College gives many thanks to Kilian Engineering, Inc. who is our presenting sponsor of the dinner theater this year. We also want to thank the many other sponsors that are supporting VGCC’s 50th anniversary celebrations and events.

Philanthropists Sylvia and William “Bill” Solari of Lake Gaston have established a new scholarship at Vance-Granville Community College. While this is the first scholarship the ... More Info
VGCC’s Dr. Levy Brown to take post at NCCCS
Dec 21, 2021

The family of the late J. Wayne Adcock, an educator who served as superintendent of Vance County Schools for six-and-a-half years, has established a new ... More Info
VGCC introduces new technology platform for students
Dec 1, 2021