Published in January 2000, Vance-Granville Community College: The First Thirty Years charts the history of the college from early efforts at establishment to the present day.

The college was chartered on Sept. 4, 1969, as Vance County Technical Institute and began with four employees in two rooms of the former Post Office building on Garnett Street. In 30 years, the school has 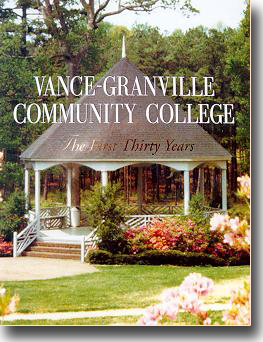 grown to four modern campuses in Vance, Granville, Warren and Franklin counties and serves about 16,000 people a year in its service area. "We thought that 30 years was an appropriate time to record the story of Vance-Granville Community College, and we believe this book is a meaningful history of the school, which has meant so much to the people of this area," Robert A. Miller, VGCC president, said in announcing the publication.

The history is a 9 1/2-x-13 inch book containing 120 pages of color and black-and-white pictures, lists of members of the Board of Trustees and Endowment Board members who have served the school and speakers at the college's 32 graduation ceremonies. It also contains a timeline of significant events in the school's history, faculty and staff members employed at VGCC 15 or more years, and donors who make possible about 400 scholarships each year.

John K. Nelms, chair of the Board of Trustees at the time of the publication, said, "We must understand where we have come from to know where we are going. Based on my many years of service with Vance-Granville, I found this history to be unusually accurate and specific in the details it relates as to how the college has reached its goals".

A great deal of research on the book was done by VGCC staff members, and the history text was written by Jan Pogue, a veteran newspaperwoman and editor from Atlanta. Bookhouse Group Inc. of Atlanta published the history.

Pogue's text includes interviews with many of the Vance County leaders who worked so hard to get a community college in the area to train residents for well-paying jobs and to prepare students for transfer to four-year colleges and universities. She also reviewed newspapers and school files in preparing the story.

John T. Church Sr., a member of the VGCC Board of Trustees from its beginning until he stepped down as chairman in January 1999, wrote the book's foreword. A former chairman of Rose's Stores and 20-year member of the North Carolina General Assembly, Church said prior to his death on Feb. 27, 1999, that of all his state and community activities, "I realize there is no one endeavor that has meant more to me through the years than to work for Vance-Granville Community College."

The history is dedicated to Dr. Ben F. Currin, who became president of VGCC of 1981 and led the college through its large growth in enrollment, physical plant construction and Endowment Fund contributions until his retirement in January 1999.

Vance-Granville distributed the history to libraries, schools, staff and faculty, members of its Board of Trustees and Endowment Fund Board of Directors, and industry.