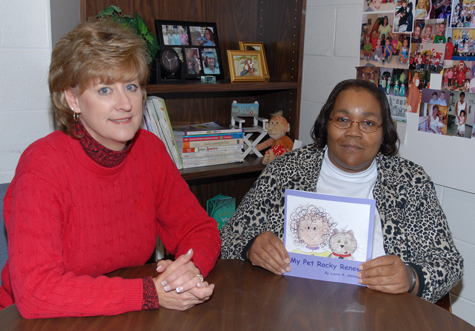 Her own pet cat of the same name served as Alston’s inspiration for the book, which tells the story of “a young girl who learns lessons from her cat about empathy, compassion and how to care for another living being,” the author said. Alston started writing the book before the real-life Rocky Renee died in 2009. In addition to the beloved pet, Alston dedicated the book to her mother, Julia Perry Alston, her family and friends, the Adult Day Program in Henderson, and her niece, Phyllis. “I told Phyllis 20 years ago that I would dedicate my first book to her, and I finally did it,” Alston recalled. She spent many years desiring to write a book, and in the meantime, she has seen several of her poems published in the Righter Monthly Review, which is produced by the company that eventually published My Pet Rocky Renee. When Alston became a VGCC student in the early childhood education program, she completed her co-op experience working at the Day Care Center on the college’s main campus. There, she met Denise Gill, the manager of the center, and learned that Gill was a talented artist. Alston asked Gill if she would illustrate her book, and the resulting combination of words and images was published as My Pet Rocky Renee.

In addition to encountering her illustrator, Alston said that VGCC helped her to write the book in other ways. “Through my courses, I learned about children at different stages of development, so that helped me to write in a way that was age-appropriate,” Alston said. “Also, it helped that I did plenty of writing in my early childhood and my English classes.” Alston graduated with an Early Childhood Associate degree in 2008. While at VGCC, Alston was recognized for academic excellence when she was inducted into Phi Theta Kappa, the international honor society for students of two-year colleges. Alston said that she has learned about perseverance as a student and as an author. “I encourage young people to set goals and take small steps toward reaching their goals,” Alston said. “If they do, then someday, they will succeed!”

The book can be purchased online through the publisher’s web site .

Above: From left, illustrator Denise Gill and author Laura Alston, holding a copy of her book, My Pet Rocky Renee. (VGCC Photo)