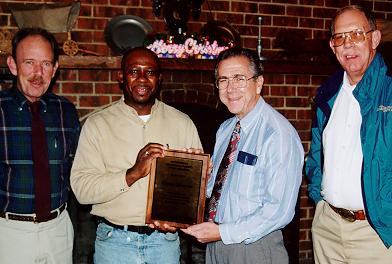 Charles Hargrove of the Williamsboro community of Vance County works full time as a machinery technician for Burlington Industries in Oxford. When the company announced it will close the plant in the spring of 2000, Hargrove said he knew he had to find another occupation.

He has graduated from the North Carolina Truck Driving School at Vance-Granville Community College and has been offered several jobs in that field. But his wife, Mary, has contracted an illness that will force her to leave her job as a nurse, and Hargrove said he didn’t want to spend the long periods of time away from her that truck driving would require.

So Hargrove is currently enrolled in the Welding Technology program at VGCC, and he is such an able student that the school named him its Vocational Student of the Semester for Fall Semester 1999.

Hargrove was selected for the honor from nominees from the seven vocational programs at the college. He was chosen for his high academic standing, class attendance and attitude, according to James H. Wheeler Jr., chairman, Public Service and Vocational Education.

Bill Jones, Welding Technology program head/instructor, nominated Hargrove for the semester honor. Jones said that Hargrove makes outstanding grades in the shop and the classroom, and he takes all instruction seriously. “Since he is an older student (Hargrove is 40), Charles Hargrove knows what it takes to succeed, and he motivates the teen-agers in the class to do their best; they look up to him,” Jones said.

In addition, Jones said that Hargrove is conscientious about helping young people in the community.

“I did some research and found that welding jobs are plentiful, and they pay as much as I have been making,” Hargrove said. When he completes the program in August 2000, he plans to seek employment in the welding field.

“But I want to continue my education, and I will probably attend Vance-Granville on a part-time basis in the Industrial Maintenance program,” he said.

Hargrove is a lifelong resident of the Williamsboro community and is a graduate of Vance Senior High School. Vance-Granville Community College is a way of life for his family. His wife got her nursing education at VGCC, and he has two daughters, Delores Glover, an accounting student at Vance-Granville, and Miranda Hargrove, a 1999 high school graduate who plans to attend the college. Charles and Mary also have a son, Charles R. Hargrove, who is an elementary school student.

At a lunch in his honor on Dec. 8, Wheeler presented Hargrove a plaque, and his name will be engraved on a permanent plaque in the Student Services Building, honoring all top vocational student selections.