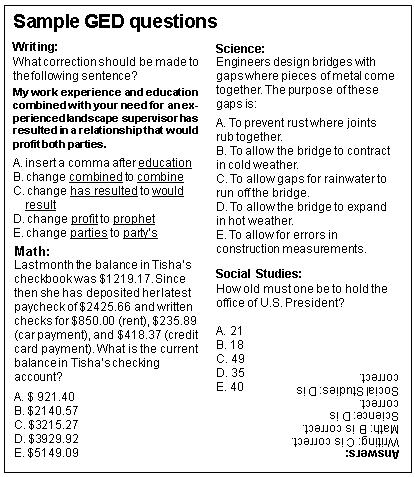 Come back and “Finish What You’ve Started.”

That’s the message that Vance-Granville Community College officials are trying to get across to General Educational Development (GED) candidates who have not completed all five of the required tests.

On Jan. 1, 2002, GED testing centers throughout the United States, Canada and overseas, including those at Vance-Granville’s four campuses, will begin administering a new series of the tests. This is a result of changes mandated by the American Council on Education. Anyone who has not completed all five sections of the current test by the end of 2001 will have their records wiped clean and will have to start over.

“We are going to try our hardest to get everyone currently enrolled in a GED class to complete the tests before the deadline,” said George Henderson, VGCC’s director of Adult Basic Skills. “But, there are approximately 1,750 GED candidates who have not completed the five tests at VGCC. If you’re not currently enrolled and have previously tested and passed one or more GED tests, Vance-Granville Community College wants you to come back and finish what you’ve started.”

Successful completion of tests that measure a person’s mastery and knowledge of writing, social studies, science, reading and math earns the student a certificate considered the equivalent of a high school diploma.

Under current rules, a person has five years in which to complete the five sections of the GED test. “There are people in Vance, Granville, Warren and Franklin counties who need only one section to earn their certificates,” Henderson said, “and it would be a real shame for them to not complete the tests and have to start all over.”

National GED officials say that the high school curriculum has changed so much that the GED tests must change accordingly. More problem solving and questions reflecting practical situations and documents are expected to be part of the revised tests. “We don’t know what the new tests will be like yet, but all indications are they will be more rigorous than in the past,” Henderson said.

More than 800,000 people take the GED every year, accounting for one-seventh of all high school diplomas. More than 95 percent of American employers now consider the GED equal to a conventional diploma for hiring, salary and advancement.

The current GED was last revised in 1988. North Carolina ranks ninth in the nation in the percentage of students passing the test.