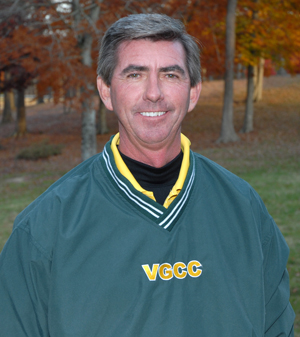 Jim Schwab of Durham has been named the coach for the intercollegiate golf program at Vance-Granville Community College. Schwab takes the reins of the program as it prepares for its third season, and its second season of official National Junior College Athletic Association (NJCAA)-level competition.

Schwab (pictured above) has been playing golf since he was 25 years old. After he retired as a Duke University police officer, he became a professional golf instructor in 2003, earning his master’s certification from the United States Golf Teachers Federation in 2005. Schwab said he has taught “everyone from beginners to pros” in North and South Carolina, in addition to competing as an amateur and professionally himself over the years. He has even taught others to become golf instructors. “I am excited about the challenge of coaching a college team,” Schwab said. “Mostly, I just love playing, practicing and teaching the game of golf.”

Schwab is currently recruiting players, including both men and women, for the spring 2011 season. For more information about participating in the VGCC Vanguards golf program, contact Coach Schwab at (919) 475-1542 or by e-mail .