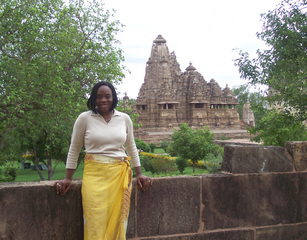 Marian C. Dillahunt-Andrews, a Developmental English and Reading instructor at Vance-Granville Community College, spent part of her summer vacation in India, but she was actually still at work, representing the college and learning about education in a foreign land.

Dillahunt-Andrews was selected by VGCC’s Global Awareness Committee as a World View delegate. She followed in the footsteps of other VGCC instructors who participated in World View, including Peter Metzner, who traveled to China in 2006, and Linda Barnes, who toured Spain in 2005. World View is an international program for educators based at the University of North Carolina at Chapel Hill. The program partners with public and private K-12 schools, community colleges and universities throughout the state to help educators and students succeed in an increasingly inter-connected world.

Dillahunt-Andrews, dressed in an Indian sari, shared highlights of her trip with her colleagues at the college’s annual faculty/staff convocation in August. She and her fellow World View delegates learned more about the educational system and the diverse cultural and religious practices in India by visiting schools, cultural attractions, and historical sites in the cities of New Delhi (India’s capital), Old Delhi, Jaipur, Agra (home of the Taj Mahal), Varanasi and Khajuraho over 12 days.

Dillahunt-Andrews found that India has no compulsory education, contributing to a low literacy rate and high poverty and drop-out rates, compared to those in the United States. The country has trade and vocational schools, but does not operate what Americans would recognize as community colleges. The World View group did visit a variety of schools, including one of India’s premier four-year universities, the Indian Institute of Technology (IIT). Despite many differences between the two nations, India is, like North Carolina and other states, going through economic transitions, but it is only in the beginning of a transformation away from agriculture and toward more industry and technology. “Teachers in India and the United States also face the same challenges in developing innovative teaching strategies to engage students in higher level/critical thinking skills, and rural schools in India lack resources to adequately teach students, just as some do here in North Carolina,” Dillahunt-Andrews said.

“India is a wonderful brew of modernity and antiquated tradition,” Dillahunt-Andrews recalled. “Through my observation and examination of India’s culture, I have been afforded an opportunity in which to incorporate interdisciplinary instructional strategies within the classroom setting which utilize India’s rich cultural heritage to advance discussion and critical thinking skills amongst adult student populations in regards to cultural, geographical, and educational similarities and/or differences between the United States and India.”

A unique aspect of the instructor’s trip was that she recorded oral history interviews and then created podcasts, digital audio files that are distributed online. “The recordings will allow me to enrich student classroom experiences with story-telling, particularly when preparing my lecture for the unit on rhetorical modes of writing, and my lecture on tradition in Southern Culture,” Dillahunt-Andrews explained. “My visit to India has allowed me to think globally and will afford my students the opportunity to think ‘outside the box’ and of their place within the global society.” She said that the 21st-century economy demands “an internationally competent workforce.”

To listen to her podcasts, visit the link here Internet Explorer 7 may be required for users who are not using CampusCruiser or another provider to subscribe to RSS feeds.

By sponsoring symposiums, leadership programs and academic trips like the one Dillahunt-Andrews took to India, World View has become a key resource for global education, which is increasingly essential at community colleges. More than 78 percent of community colleges sponsor or work with programs to offer study abroad trips, and 80 percent of community colleges have integrated international components, according to a survey by the American Association of Community Colleges. VGCC organized its first study-abroad trip in 2006 to Costa Rica, and the college’s Global Awareness committee continues to work on promoting students’ understanding of global issues, and on developing instruction that prepares students to compete in a global economy.

Vance-Granville administrators said that they were delighted and proud to be able to send Dillahunt-Andrews to India as part of the World View program, and they are looking forward to other opportunities for VGCC instructors to travel abroad in the future.

Above: VGCC instructor Marian C. Dillahunt-Andrews visits an ancient temple in India while touring the country as a World View delegate