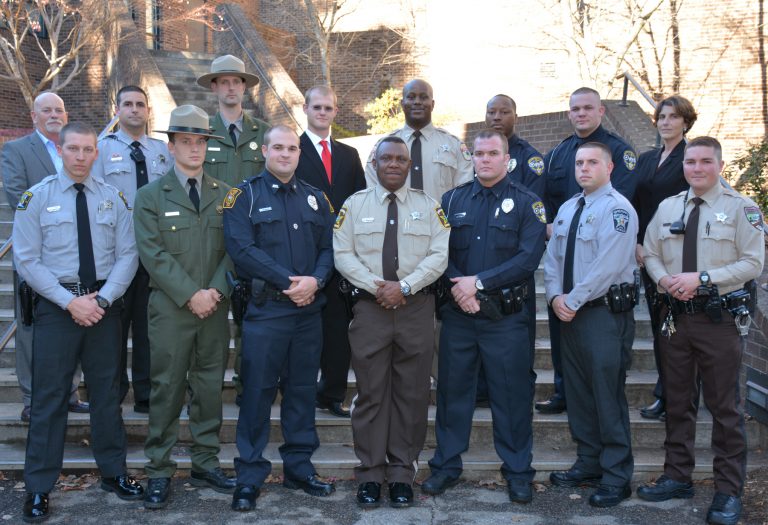 Thirteen cadets graduated on Dec. 15, 2015, from the Basic Law Enforcement Training (BLET) program at Vance-Granville Community College, in a ceremony held in the Civic Center on Main Campus. After passing the state certification exam, all are authorized to work in any law enforcement agency in North Carolina.

The ceremony began with a presentation of colors by students from the ROTC program at Northern Vance High School, and the singing of the national anthem by NVHS student Jaylen Webb.

In welcoming remarks, Dr. Angela Ballentine, VGCC’s vice president of academic and student affairs, thanked the many leaders from local and state law enforcement agencies in attendance for partnering with the college. “Your support for the BLET program is invaluable,” Ballentine told the law enforcement representatives. “You sponsor our cadets, hire our graduates, provide many of our instructors, and give us feedback and advice. This successful partnership between VGCC and our community improves the safety and quality of life of our region.” She congratulated the graduates on completing the rigorous, 644-hour training program and encouraged them to continue their education.

Speaking on behalf of the class, Cadet Brandon Link praised their instructors, who taught them lessons that would shape their future careers. He called on his classmates to serve and protect “with honesty and pride.”

Graduates selected Sgt. Richard Creech of the North Carolina Wildlife Resources Commission, one of their instructors, to serve as their guest speaker. “Remember in your career to always treat people with respect,” Creech reminded the cadets. “Wearing this badge makes us no better than anyone else, but we are held to a higher standard.”

Andrea Ferguson, the program coordinator, and instructor Glen Boyd presented awards to the top students in the class in three categories. Womack won the “Top Gun” Award for having the highest accuracy score in weapons firing. Ruark earned the Physical Training Award for scoring highest in the various fitness tests the cadets undergo. Wright took home the Academic Achievement Award for having the top grade average in the written tests each cadet must pass.

After all graduates received their certificates, the group recited the “law enforcement code of ethics” published by the International Association of Chiefs of Police.

For more information on the BLET program , contact Ferguson at fergusona@vgcc.edu .