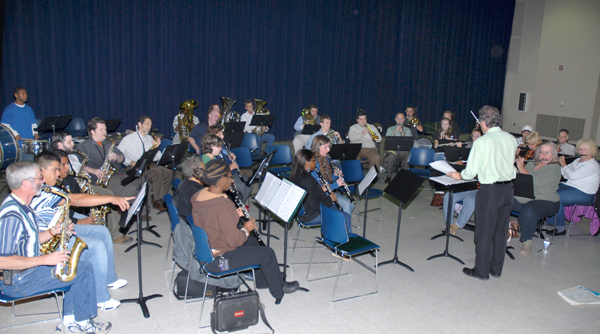 The Community Band recently formed at Vance-Granville Community College will hold its first concert on Friday, Dec. 12. The program will begin at 7 p.m. in the Civic Center on the college’s main campus in Vance County. Admission is free and the event is open to the public.

Michael Stephenson , the college’s new music instructor and director of the band, said that the evening’s music “will center on a holiday theme.” He said that selections would include Sleigh Ride and A Christmas Festival, both by Leroy Anderson; Sleepers, Wake, by Johann Sebastian Bach; A Brazilian Sleigh Ride by Percy Faith; a holiday sing-a-long; and several standard band compositions. A special portion of the program will also be devoted to small children.

Since Oct. 20, the band, a combination of VGCC students and interested citizens, has been rehearsing each Monday night in the Civic Center. All four counties of the VGCC service area are represented in the approximately 35-member band, with some members who travel as far as from South Hill, Va. to participate.

Alto saxophone player Robert Bass of Henderson is one of several members of the new band who participated in the Kerr Lake Ensemble, which performed at a variety of venues throughout the area in the 1970s and 1980s. Since it disbanded, Bass has played in a church woodwind ensemble, but many of the new band members have not picked up an instrument in years.

“I’m excited about being able to play again with other performers. For many of them, they’re reliving some of the good experiences they had in high school or college,” Bass said. “The camaraderie among the wide variety of people of different professions is a plus. It’s sort of a resurrection of the Kerr Lake Ensemble idea of a community band.” Band members will even be playing from some of the disbanded ensemble’s sheet music.

Bass added that the new band benefits from the talented younger college students who participate. “I’m pleasantly surprised that it makes a good blend,” he said. Bass praised Stephenson as an artist who seeks to help each player accomplish his goals. “He’s very well qualified and an asset to the community college,” he said.