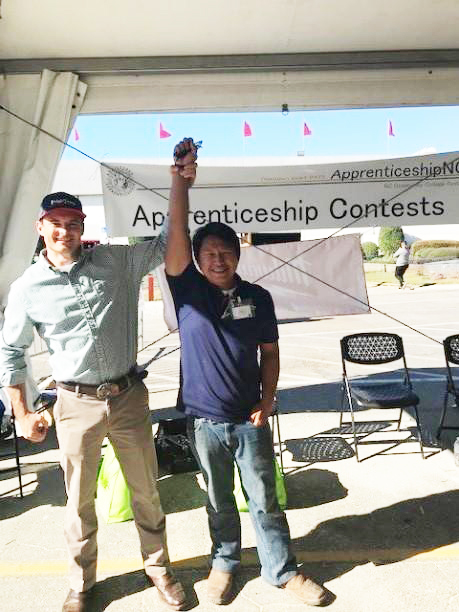 Jover joined the apprenticeship program earlier this year. Already enrolled in the Air Conditioning, Heating and Refrigeration Technology program at VGCC, he had worked in the HVAC field for almost four years before he became an apprentice, but only in residential installation.

The 14th Annual Apprentice HV/AC-R (Heating, Ventilation/Air Conditioning – Refrigeration) Contest was open to the first 20 applicants, registered in a program recognized by the N.C. Department of Commerce, who have completed less than 8,000 hours of training. Eight apprentices participated and six were awarded prizes. Third place awarded a prize of $175 out of a total of $1,325 in prizes to the top finishers. The top three finishers received extra prizes with Jover winning a tool bag, hand tools, and a drill set in addition. 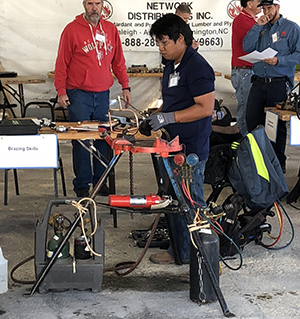 The contest was designed to promote interest among apprentices in the skilled construction trades, according to the NC State Fair organizers. “This contest dramatizes a ‘job training program’ through which ApprenticeshipNC has assisted voluntary efforts of industry to meet their needs for skilled workers,” apprenticeship director Kathryn Castelloes said. “These skilled craftworkers have contributed significantly to the economic growth of North Carolina.”

A program of the North Carolina Community College System, ApprenticeshipNC seeks to “ensure the state has an innovative, relevant, effective and efficient workforce development system that develops adaptable, work ready, skilled talent to meet the current and future needs of works and businesses to achieve and sustain economic prosperity,” NCCCS says on its web site.

Jover’s entry into the competition came at the suggestion of NCCCS staff, Thornton said. “Cyrus was signed up for the event even before he knew about it,” Thornton added, noting that it was a great experience for Jover and the company.

“I was very nervous going in because I had never competed in a contest like this,” Jover said. “You do not know how skilled your competitors are because they are strangers. You have no idea what to expect from them or the contest. I was also nervous because I knew that Vance-Granville and Frigi-Temp were depending on me to represent them well.

“Despite the pressure and nerves,” he added, “the competition was a fun learning experience because it shows you how you rank when up against your peers. It also shows you how much more there is to learn so that you can be the best.” Thornton added that the contest began at 8 a.m. and lasted until 3 p.m.

“If I could hire five more team members just like him I would do so in an instant,” Thornton said. ”His drive to become a professional, his humility, his work ethic and the way that he chooses to work as a true team player is something I truly admire about him. I am humbled that I get to work at Frigi-Temp alongside Cyrus and many others just like him.”

Jover is originally from the Philippines, where he earned a college degree in Biology before coming to the United States seven years ago, at age 20. Here, he found that the HVAC field had numerous job openings. He enrolled at VGCC, first as a part-time and then a full-time student. Now, he is done with almost all of his classwork and spends most of his time working at Frigi-Temp. He sometimes work a full 40 hours per week at the company while continuing his studies.

Thornton said the apprenticeship program is going very well while “still in its infancy.” “We have high hopes for the future and look forward to hiring several more apprentices over the next year,” he said.

As for next year’s competition at the State Fair, Thornton says will be ready for another round. “We weren’t able to coach Cyrus prior to the event and, with this being the first time, none of us any idea what to expect,” he said. “He did an excellent job by placing in third and next year we are looking forward to him taking first place.”

Michael Whittemore, program head for at VGCC, shared in Thornton’s excitement about Jover’s accomplishment. “Cyrus is exactly as Cory describes him. He is an excellent student and he makes Vance-Granville proud, not only for this contest but also for the professional manner in which he performs as an apprentice at Frigi-Temp,” he said.

Employers who are interested in partnering with VGCC on apprenticeships are encouraged to contact Ken Wilson, project manager for VGCC’s TechHire grant program, at wilsonk@vgcc.edu or (252) 738-3259.

In the photo at the top of the page, Cory Thornton, chief operating officer for Frigi-Temp in Youngsville, left, celebrates with Cyrus Jover, a student in the Air Conditioning, Heating & Refrigeration Technology program at VGCC who is also an apprentice with Frig-Temp. Jover placed third in the 14th Annual Apprentice HV/AC-R Contest at the N.C. State Fair in October.

Above, Cyrus Jover of Henderson, a VGCC student who participates in the VGCC apprenticeship program through Frigi-Temp of Youngsville, placed third in the 14th Annual Apprentice HV/AC-R Contest at the N.C. State Fair in October. In the photo above, Jover is being tested on his brazing skill level and safety precautions during one section of the day-long competition. Event organizers gave instructions and then, as shown in the background of the photo, judged students on how well they soldered while also observing their steps to follow good safety measures.