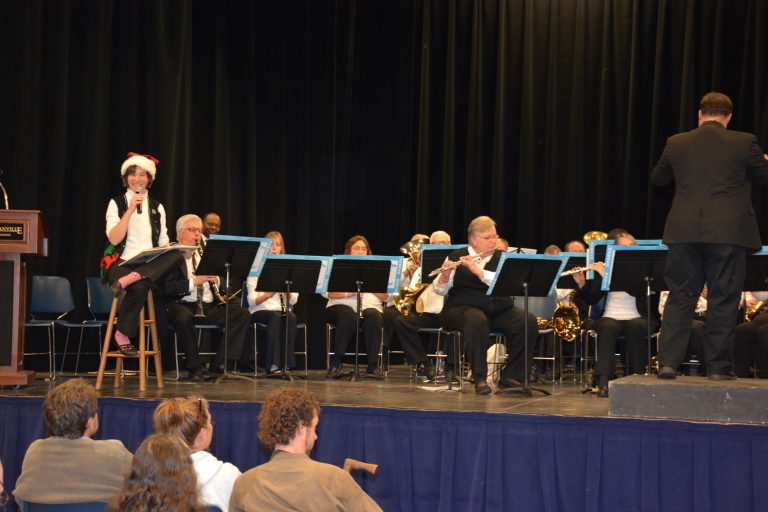 The Vance-Granville Community Band presented its seventh annual free holiday concert on Tuesday, Dec. 9, in the Civic Center on the college’s Main Campus in Vance County. Entitled “A Powerful Christmas Concert,” the program featured a variety of traditional holiday favorites.

Carl Cantaluppi of Butner, who has played clarinet in the band for many years, spoke on behalf of the ensemble and introduced each piece. Among the selections were a march, “Christmas Joy” by Eric Leidzen; “A Continental Christmas” by Lloyd Conley; “Cantique de Noel” (“O Holy Night”) by Adolph Adam; “Panis Angelicus” by Cesar Franck; “Holiday For Winds” by Glenn Osser; Themes from “The Nutcracker Suite” by Tchaikovsky; “Overture to a Winter Festival” by James Curnow; and “A Christmas Festival” by Leroy Anderson.

The concert also featured spotlights on two smaller groups, playing familiar carols. Saxophonists Robert Bass of Henderson, Jeff Myers of Townsville and Tom Koinis of Oxford, plus bassoonist Tracie Winstead of Louisburg, calling themselves the “Old Vanguard Woodwind Quartet,” presented “What Child is This” and “Silent Night.” A flute trio, consisting of Dee Pinnell of Palmer Springs, Va., Laurel Sciortino of Oxford and Bev Lazar of Henderson, performed “Angels We Have Heard on High.”

VGCC music instructor Ivory Brock serves as the band’s primary conductor. Associate conductor Brian Miller, the band director at Louisburg High School, also directed the band on some selections during the concert. When not conducting, Miller played trombone in the band.

The Vance-Granville Community Band is open to musicians of all ages from throughout the region, as well as VGCC students and high school students. The band will begin rehearsals again on Jan. 26, 2015.

Above:  From left, Dee Pinnell of Palmer Springs, Va., Laurel Sciortino of Oxford and Bev Lazar of Henderson play “Angels We Have Heard on High” during the Community Band’s holiday concert. (VGCC photo)

See more photos on the VGCC Facebook page.
to top