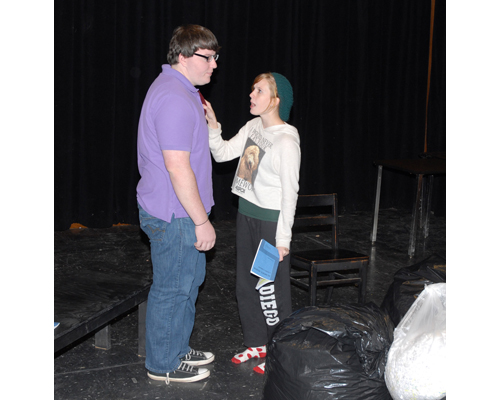 Vance-Granville Community College Drama students will present a production of John Cariani’s comedy, “Almost, Maine,” December 6-9. Performances begin on Thursday, Dec. 6 at 8 p.m.; Friday, Dec. 7 at 8 p.m.; Saturday, Dec. 8 at 2 p.m. and at 8 p.m.; and on Sunday, Dec. 9 at 2 p.m. All performances are in the small auditorium in Building 2 on the college’s Main Campus in Henderson.

The title refers to the remote, mythical town in which the play (first performed in 2004) is set. On a cold, clear, moonless night in the middle of winter, Almost’s residents find themselves falling in and out of love in unexpected and often hilarious ways.

Admission is $10 for the general public, and $5 for students, VGCC faculty and staff, and seniors. Tickets may be purchased at the door, but attendees are encouraged to secure their seats by making reservations. For more information and to reserve seats, contact Betsy Henderson at (252) 738-3371.

Above: From left, VGCC students Cody Trivette of Oxford and Cameron Kester of Bullock rehearse for the play, “Almost, Maine.” (VGCC photo)