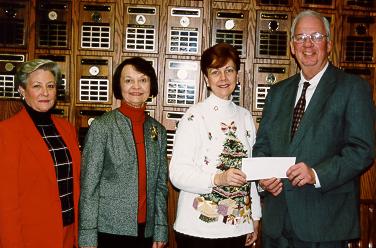 Members of the Oxford Woman’s Club played Santa Claus to deserving students at Vance-Granville Community College when they endowed two Presidential Merit Award scholarships at the school in December.

The club donated $24,000 to the VGCC Endowment Fund and Scholarship Program to establish the two scholarships, each of which will award $1,000 annually to a Vance-Granville student.

Club President Suzanne Sella said the club will observe ITS 100TH anniversary in 2003, and its members wanted to do something significant as part of its celebration. “Our club has a long history of support for education, having provided scholarships through the county high schools,” she said. “We learned through a brochure that donations to the VGCC Endowment Fund last forever, and we really liked that.”
Only the interest earned on donations to the Endowment Fund are used to fund scholarships, VGCC President Robert A. Miller pointed out. “Therefore, the two Oxford Woman’s Club Presidential Merit Awards will be presented as long as there is a Vance-Granville Community College,” he said.

Jeannette Carey, corresponding secretary of the club, said they also liked to see the scholarships go to “students who are already in college and working hard, ones who really deserve them.”

The first two Oxford Woman’s Club Presidential Merit Award scholarships will be presented to students enrolling in Vance-Granville Community College in Fall Semester 2003. Each year the college presents more than 200 scholarships to full-time students and another 200 to part-time students from its Endowment Fund and Scholarship Program.

Sella, Carey and Judy Wrenn, first vice president of the club, presented the $24,000 to endow the two scholarships to Miller on Dec. 19.

An organization, individual or business can endow an Academic Achievement scholarship for $6,000. A donation of $12,000 will endow a Presidential Merit Award, which provides a student with $1,000. A $25,000 gift to the Endowment Fund endows a Presidential Scholar Award, which provides an annual scholarship of $1,200 to the very best students at Vance-Granville. Any individual or group interested in starting a scholarship may contact the president’s office at Vance-Granville Community College for more information.