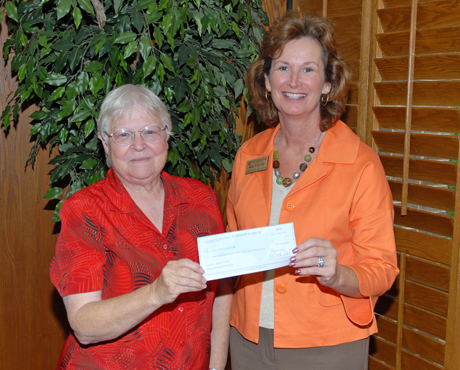 In conjunction with its recent 50th anniversary reunion, the Oxford High School Class of 1960 made contributions to the Vance-Granville Community College Endowment Fund, increasing the size of the scholarship fund the class had established to honor the late educators, Eben G. McSwain and Mary Frances McSwain. Pictured above, Dr. Shirley Tippett Jones of Goldsboro (left) presents a check on behalf of her fellow Class of 1960 graduates to VGCC Endowment specialist Kay Currin.

The Class of 1960 created the scholarship fund in 2005 (at their 45th anniversary reunion) in honor of their former teacher and guidance counselor, Mary Frances McSwain, and her husband Eben. Mrs. McSwain taught at the Masonic Home for Children in Oxford and in Granville County schools from 1945 to 1959. After earning a Master’s in Education from Duke University in 1959, Mrs. McSwain became the county’s first guidance counselor, working at Oxford, J.F. Webb, and South Granville high schools until her retirement in 1976. Mr. McSwain was one of the first instructors at VGCC, where he headed the Electrical Installation program (today Electrical/Electronics Technology ), and he also taught at the Masonic Home for Children. He served on VGCC’s Board of Trustees after his retirement.

The Eben G. and Mary Frances McSwain scholarship was initially endowed at VGCC’s Academic Achievement scholarship level. After Mrs. McSwain’s passing in 2006, additional contributions from the McSwains’ former students, colleagues, friends and family upgraded the scholarship to the Presidential Merit Award level. Members of the class are now encouraging continued community support of this scholarship in order to upgrade it to the highest level of VGCC scholarship, the Presidential Scholar Award. Contributions may be mailed to the Vance-Granville Community College Endowment Fund, c/o McSwain Scholarship Fund, P.O. Box 917, Henderson, NC 27536.