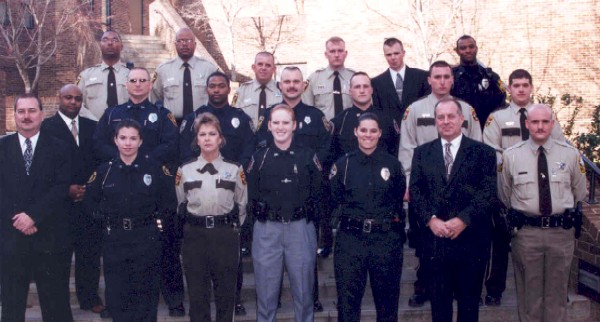 Nineteen new officers are trained and certified to fight crime in the area after graduation Dec. 14 from the 78th Basic Law Enforcement Training (BLET) class at Vance-Granville Community College.

This is the largest BLET graduating class in several years at VGCC, said Tony Pendergrass, law enforcement training coordinator at the college. “This is a tough course, and since 23 candidates began the training in August, these 19 who have completed it have reason to be proud of their accomplishment,” he added

Demario Chavis took the Physical Fitness Award for having the best score in the Police Officers Physical Ability Test and other physical training. The Top Gun Award for highest scores in handgun and shotgun was won by William Henze, and Rachel Batton won the Academic Achievement Award for highest grade average in the 33 tests BLET students are required to take and pass.

Upon successful completion of the BLET curriculum, the graduates took the state law enforcement certification exam and all passed.

Sgt. Matthew Nies of the Henderson Police Department, one of the part-time instructors for the VGCC BLET class, was the speaker at the graduation. He said he was offering goodbye and welcome to the graduates – “Goodbye because you are leaving as students and welcome to your new profession.”

Nies told the audience of family, friends and representatives of area law enforcement agencies that he watched the class members mature and improve over the 16 weeks of training. He told the graduates: ” I know each of you had personal battles to fight, and it wasn’t easy to complete the course. All of you had to want this profession in order to succeed in this school.”

Pendergrass said that a law enforcement career is not for everyone, and the BLET class is to find out who it is for.

Nies said, “This course is a weeding-out process, and these 19 graduates are the strong who survived.”