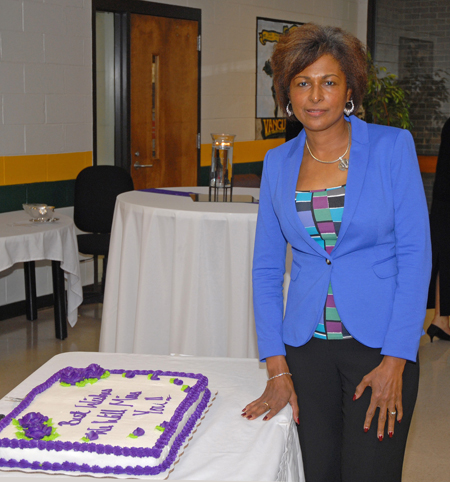 Vanessa R. Jones of Norlina is retiring, effective January 1, 2014, after more than 25 years of service at Vance-Granville Community College. Members of Jones’s family joined her VGCC colleagues at a reception held in her honor on Dec. 5, 2013 at the college’s Main Campus.

Jones worked in the Vance County school system for five years before joining the VGCC staff in 1988 as assistant coordinator and advisor at the college’s Warren County Campus . In 1996, she became a counselor at VGCC’s main campus. Jones later held leadership positions as Dean of Student Development and Advancement Services, Vice President of Community and Economic Development, and Dean of Academic and Career Pathways. Finally, Jones retired as Dean of Special Projects and Dean of Warren Campus. She described her 25 years at the college as “a wonderful experience.”

At her retirement reception, VGCC President Stelfanie Williams praised Jones as an “adaptable, versatile leader” who accepted numerous and varied assignments over the years and succeeded in all of them.

Active in the community, Jones is a former chair of the Henderson-Vance Chamber of Commerce board of directors and currently serves on the boards of the Vance County Community Foundation, Warren County and Vance County Education Funds and the Triangle North Healthcare Foundation.

Above: Vanessa Jones at her retirement reception.  (VGCC photo)