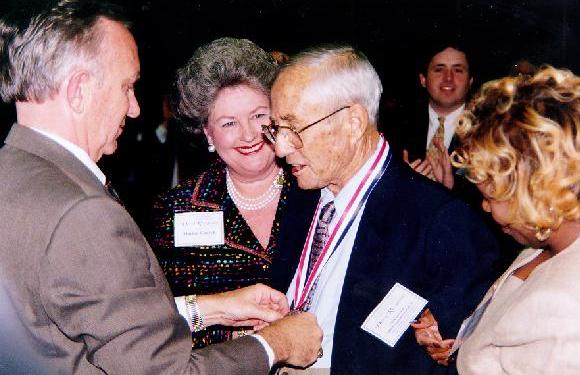 Church, of Henderson, was honored at a Day of Recognition on Nov. 19, along with the other 1998 recipient, Dr. Frank Weaver, former assistant director of adult education for the community college system.

The I.E. Ready Award is presented to people who have contributed significantly to the establishment and growth of North Carolina’s community colleges, the state system announced. The award honors contributions made locally, statewide and nationally.

Named for Isaac Epps Ready, the first state director of the Department of Community Colleges, the award was established on May 17, 1963, to commemorate the legislation that created the community college system.

John T. Church Sr. was appointed to the Board of Trustees of Vance County Technical Institute by the Vance County Board of Commissioners when the institute, forerunner of Vance-Granville Community College, was established in 1969. He was chairman of the board’s Building Committee for many years, during which the school’s physical facilities grew from the former hospital building in downtown Henderson to four modern campuses located in Vance, Granville, Warren and Franklin counties.

His fellow board members elected Church chairman in July 1993. He has continued to champion the cause of providing quality educational programs in occupational, technical, vocational, literacy and basic skills training to people in the four-county area, according to his nomination for the Ready award, submitted by the VGCC board. In addition, he has served on the college’s Endowment Fund board and has made significant monetary contributions to it. This fund has grown in recent years to more than $4 million, and more than 400 students get scholarship assistance from the fund each year.

As a member of the North Carolina General Assembly for 20 years, Church consistently worked to ensure adequate funding for all the state’s 59 community colleges, the nomination says.

The former chairman of the board of Rose’s Stores, Church has also served as a trustee for his alma mater, the University of North Carolina at Chapel Hill, and for Peace and Louisburg colleges. He has chaired the Maria Parham Hospital Board of Trustees and has served numerous other humanitarian, community and business organizations.

The nomination of Church for the Ready award says, “The only charter trustee who remains on the (Vance-Granville Community College) board, Mr. Church has provided unequaled leadership and service.”

In the top photograph, Martin Lancaster, president of the North Carolina Community College Systemplaces a medallion on John T. Church as Church’s wife, Marion, watches at the Day of Recognition ceremony on Thursday, Nov. 19, at the Sheraton Imperial Hotel and Convention Center.