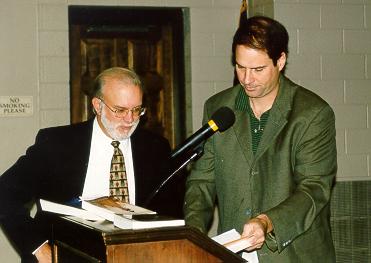 Payne grew up in Henderson and is the grandson of W.D. Payne, a former Henderson High School principal and superintendent of Henderson city schools. W.D. Payne was also one of the founders of Vance County Technical Institute, the forerunner of Vance-Granville Community College.

During his appearance, David Payne read from two of his novels, “Early From the Dance” and “Ruin Creek,” both of which are set in a town very similar to Henderson. In fact, he admitted that Henderson was the model for his fictional town of Kildeer, N.C.

About 100 students and faculty from the college, as well as quite a few community residents, attended the reading. Payne answered questions from the audience following his reading. During this period, he talked about how he writes every day, how he develops stories and characters, and about the publishing of his books. He also told how he worked on a scallop boat off the North Carolina coast after graduating from the University of North Carolina and how he has incorporated his experiences on the boat into his latest book, “Gravesend Light.”

VISITING AUTHOR – In the photo above, successful artist David Payne, right, a Henderson native, discusses what he will read during an appearance at Vance-Granville Community College Oct. 19 with Dr. John Beck. Beck, VGCC chairman of the College Transfer program, introduced Payne to a crowd of about 100 students, faculty and community members.