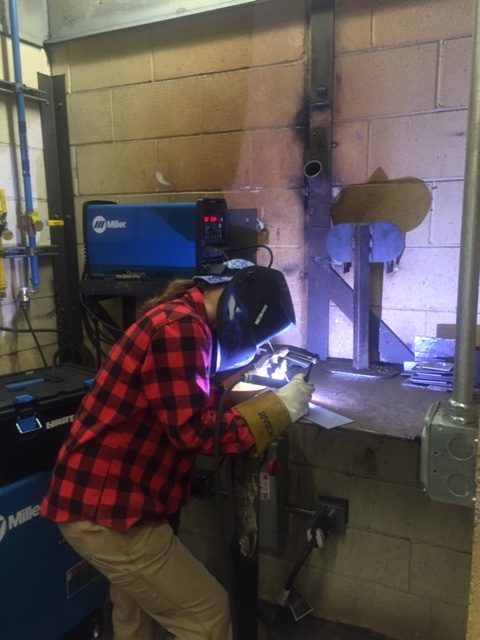 According to the American Welding Society, women make up roughly 5 percent of the welding profession in the United States. This situation provides ample opportunity for women to join this in-demand field. It also puts Vance-Granville Community College (VGCC) in a unique position, because about 70% of VGCC’s students are women, and they can take Welding Technology classes at two of the college’s four campuses: the Main Campus in Vance County and the Franklin County Campus near Louisburg.

Jenae Burk, a resident of Wake Forest, is a first-year Welding student at the Franklin Campus. She describes herself as a creative, organized individual with a laid-back personality. Burk is the only woman in her Welding classes right now. When asked how she felt about that, she replied, “I don’t feel like I’m treated differently, which is good. It is a unique atmosphere, and I like to watch the guys to see how they think and operate. For the most part, I ignore that aspect of it and just do my work.”

Burk recalled that she had not even thought until welding until January of 2020. She was working in food service at the time, but she wanted to figure out what she wanted to do as a career – preferably one that would someday provide her with income and flexibility once she married and started a family.

“Someone mentioned to me that welders make a lot of money,” Burk said. “I looked it up, researched it, and I thought that welding was pretty cool.” She then took a two-hour course at the Raleigh-based nonprofit organization, ShopSpace, part of which was a demonstration of metal inert gas (MIG) welding. “The guy who was teaching the course said to me, ‘hey, you are pretty good at this, and I’ve never seen anyone complete this task so fast,’” Burk remembered. That experience made her lean toward welding even more.

Once the COVID-19 pandemic disrupted the food service industry, she took the opportunity to enroll in Welding at VGCC, which she chose because of its convenient location and because of a friend’s recommendation. “This whole thing is a God thing,” Burk marveled. “Everything worked itself out.”

Of her classes, Burk said, “I think the whole opportunity has been exciting. Last week, ‘Mr. T’ [instructor Allen Tharrington] was making a part, and he let me do the majority of the welding for it. It was pretty fun, because it was an actual application of welding rather than working from a textbook. All the labs have been fun.”

Burk admitted that with her personality, she puts pressure on herself to perform well and doesn’t feel that she has anything to prove. Her instructors report that she is performing well in her classes and making everyone proud.

Dr. Krystal Foxx, VGCC’s Job Placement Coordinator (Job Corps Scholars Program) stated, “VGCC has the unique opportunity to keep promoting the closing of the gender gap in skilled trades such as welding by encouraging more female participation. In the future, the hope is that more women take part in the welding program.”

Burk noted that learning welding provides her with a trade that she can practice on her own terms. “I can immerse myself in welding, and if I have to stay home in the future, I can have a shop in my backyard,” she said. “I want to make my focus my family, but have a supplementary income.”

For information on college enrollment, visit www.vgcc.edu and click on “Admissions.”