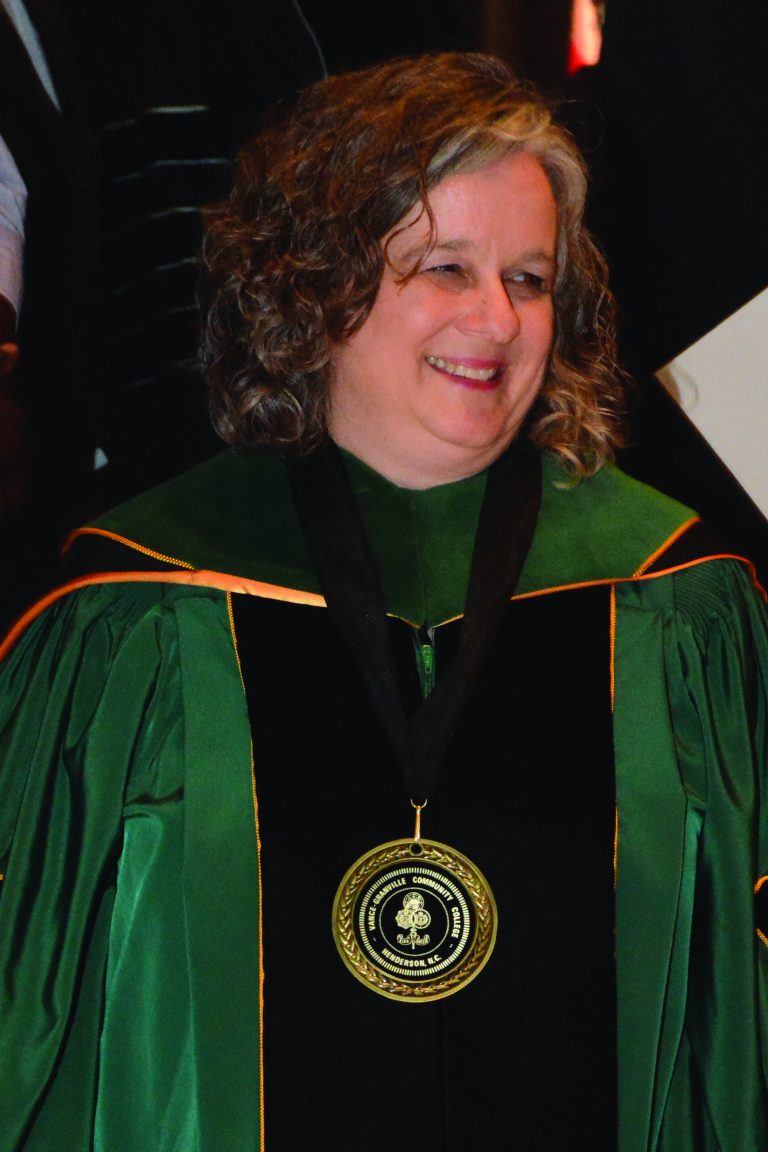 Vance-Granville Community College formally welcomed its new leader on Tuesday, Aug. 6, with an inauguration ceremony for Dr. Rachel M. Desmarais, the college’s seventh president, in the Civic Center on the Main Campus in Vance County. The historic occasion was also part of a series of events held to celebrate the 50th anniversary of the community college, which was established in 1969 as Vance County Technical Institute.

Danny Wright, chair of the VGCC Board of Trustees, performed the ceremonial investiture of the president, who has been on the job since earlier this year. In his remarks, Wright said, “We take this opportunity to look back on the rich tradition we have of providing education and training to our community. At the same time, we mark the start of a new era, and consider all the possibilities of the future.”
He then presented Desmarais with a medallion, featuring the college’s seal, to represent the authority of the president’s position.

Making her inaugural address, Desmarais remarked, “Vance-Granville Community College has been shining the light of education and opportunity in Vance, Granville, Franklin, and Warren counties for 50 years. I am proud of this legacy of learning and service. Indeed, I am honored to have been called to this college — to serve these communities. My life’s goal is to “make a difference” in whatever I do. Likewise, I believe this institution has made a difference and will continue to make a difference in people’s lives. As we embark upon the next 50 years of learning and service, we have an opportunity to renew our commitment to being a community educator, convener, and partner.”
Several dignitaries brought greetings on behalf of the state and the four counties served by the college: Peter Hans, the president of the N.C. Community College System; Archie B. Taylor, Jr., chair of the Vance County Board of Commissioners; Dr. Alisa McLean, superintendent of Granville County Schools; Angela L. Harris, Franklin County Manager; and Vincent Jones, Warren County Manager.

Special guests included not only local community leaders but also presidents of several community colleges from across the state.