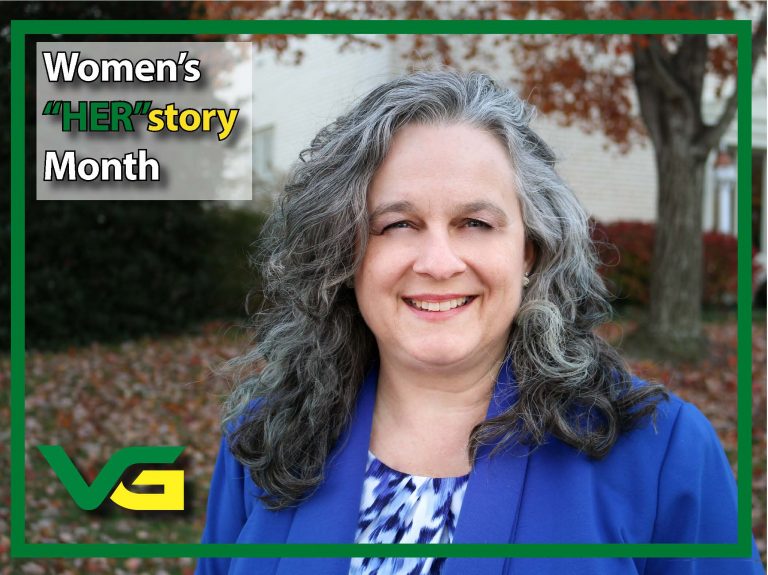 In honor of March, Women’s History Month, Vance-Granville Community College is recognizing a few of the many strong and talented women that are a part of the VGCC community in a special feature series called “Her”story.

Today in the sixth and final installment of the series, we would like to highlight the President of Vance-Granville Community College, Dr. Rachel Desmarais.

Dr. Desmarais was nominated by the VGCC Executive team.

“Dr. Desmarais is an outstanding example of a modern-day community college president,” said Vice-President Dr. Levy Brown. “She has set the environment for an unrelenting focus on student success, equity, data, teaching and learning, and ensuring students are ready for the workforce. She is highly engaged and continues to be an authentic leader”

Dr. Desmarais came to VGCC as the seventh president in January 2019 from Forsyth Technical Community College, where she had been for more than 16 years.

As a student, she attended Mars Hill College, where she received a Bachelor of Music in 1992. She later returned to school to get her Master of Science in Information Technology Management at the University of North Carolina at Greensboro. Most recently in 2015, she received her Ph.D. in Instructional Design and Technology from Old Dominion University.

Dr. Desmarais began her tenure at Forsyth Technical Community College working as an adjunct professor and became the department chair in the IT department in 2002. She later moved to a Vice-President role over Planning and Information Services. After seven years, she accepted a position as the Executive Vice-President and Chief Operating Officer at Forsyth Tech.

Since coming to VGCC, Dr. Desmarais has been a catalyst in building relationships in the community, expanding student services, supporting faculty and staff, and implementing innovative approaches to improve the student experience.

“Dr. Desmarais’s understanding of the myriad of needs we have at VGCC has led to the expanded role of The VGCC Foundation,” said Foundation Director Eddie Ferguson. “Her leadership and vision will provide greater funding opportunities for our college, all in an effort to educate, support and inspire our students.”

“I have worked with few leaders that are as committed and cares as much as Dr. Desmarais does about the wellbeing of their employees,” said Director of Human Resources Kevin Tompkins.

“Dr. Desmarais is a transformational leader with a strong commitment to fairness and equity among faculty, staff, students and the VGCC service area.” said Vice-President Dr. Jerry Edmonds. “The future of VGCC is bright with Dr. Desmarais as our leader.”