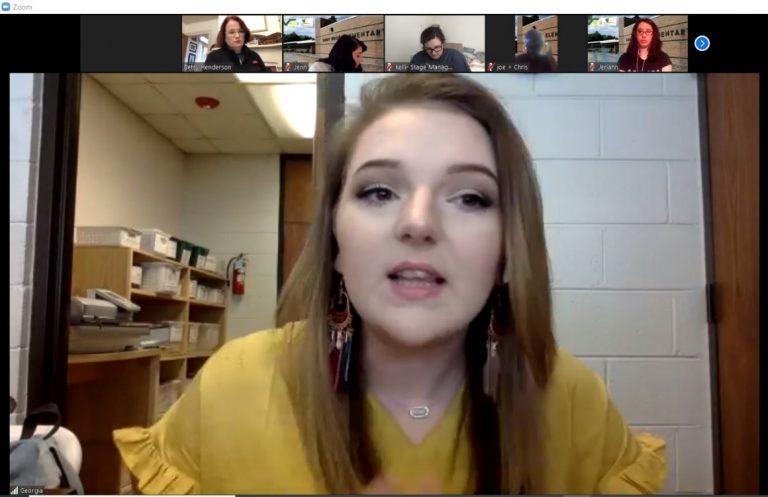 VGCC student actor Miranda Brown is seen here in the large image taken from a screen-shot of a “Zoom” rehearsal for the college’s production of “26 Pebbles.”

Going out to see a play may be impossible due to the ongoing coronavirus (COVID-19) pandemic, but the Drama program at Vance-Granville Community College is trying an innovative approach to bring the theatre to the community.
VGCC, like all community colleges across North Carolina, has temporarily shifted all classes online. Betsy Henderson, the college’s Department Chair/Instructor of Humanities and Fine Arts, and her Drama students decided they wanted to somehow put on a play online, as well. After consulting with VGCC’s Information Technology department, plans were made to use the online video-conferencing service, Zoom (available at zoom.us ), to both rehearse and present the production.

“We are not physically able to tell the play in the traditional way,” Henderson explained. “This way will allow the students to tell the story and keep everyone safe. It will also provide the community a much-needed outlet during this time of quarantine.”

This documentary-style drama is set at a town hall meeting in Newtown, Connecticut, six months after December 14, 2012, when a gunman walked into Sandy Hook Elementary School and killed 26 people (including 20 children) before taking his own life. The play likens these 26 deaths to “pebbles thrown into a pond,” which created ripples and vibrations that were felt far beyond the initial impacts.

The playwright conducted interviews with members of the community in Newtown and crafted them into an exploration of gun violence and a small town shaken by a horrific event. “26 Pebbles” premiered in Dayton, Ohio, in 2017, and has since been performed around the country.

“It is a very powerful story,” Henderson said. “It paints a picture of what the community was like before that terrible day, the confusion and frenzy on the day of that attack, and the chaos of the aftermath.”
The cast includes students Miranda Brown as “Georgia,” Ashley Ayscue as “Julie,” Rose O’Malley as “Yolie,” Brian Johnson as “Rabbi Praver” and “Mike,” Daniel Thorpe as “Joe” and “Chris,” Cheyenne Guerrant as “Jeriann,” Blake Lee as “Michael” and “Darren,” Kelli Baker as “Carrie,” Matthew Varker as “Father Weiss” and “Bill,” Amanda Cease as “Carole,” Kathleen Zoldos as “Jenn,” Eiley Cook as “Starr,” Mary Parish as “Sally,” and Chelsea Benjamin as “Carla.”

Kelli Baker and Chris Nicholson serve as the “virtual” stage managers, while Kristen Ham is a crew member and will serve as a pianist.

All these students will be in their own homes on their own computers during the performance. With the Zoom service, when a particular actor begins talking, the image automatically switches to an enlarged video of that actor, making it easy for the audience to follow the dialogue.

Henderson thinks that giving students this opportunity to present the play to the community is important. “I think we need the arts and artists at a time like this,” she said. “Entertainment, happiness and joy are important. The arts touch you in ways you may not realize at first. The Arts, and theatre especially, have a way to elevate the everyday and bring light to our world. In times like this, we need connection. We need meaning, and we need artists to help us all feel.”

Anyone interested in experiencing either performance should contact Betsy Henderson at hendersonb@vgcc.edu . She will provide each “attendee” with the Zoom meeting ID.