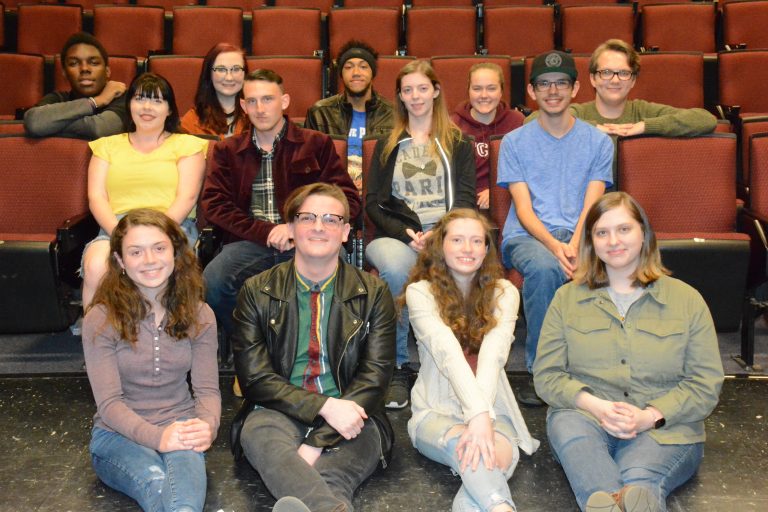 Betsy Henderson, director of the show and department chair of Fine Arts and Humanities at VGCC, also serves as Vice-President on the NCCCS AFA Association Board of Directors with Stinson and Lauren La May of Wake Tech. Together, they have worked alongside university partners to draft Comprehensive Articulation Agreements for the AFA Theatre degree for both the UNC system and Independent colleges. This working relationship is where an idea to collaborate across colleges was born.

Stinson, a BFA graduate of North Carolina School of the Arts, also holds a MA in Theatre from Miami University, and an MFA in Playwriting from Spalding University. Kim is also a member of the Dramatist Guild, and an award-winning, published playwright.

Geisha was born out of Stinson’s own personal experiences, “Many years ago, I worked with a woman who never wanted to leave home. She didn’t enjoy traveling and had absolutely no desire to go anywhere. That way of thinking seemed so strange to me. I wanted to explore the way that someone else’s mind worked. At the same time, my love for other cultures always drew me to Asia and Asian theatre styles.” Stinson added, “Appalachian Geisha started as my creative thesis for my MFA in Playwriting degree and has grown and changed in subsequent versions. It is a work in which I explore combining western and eastern cultures, along with writing a main character who is so incredibly different from me, in an attempt to understand my former co-worker.”

La May began working as a dramaturge while at the University of Georgia. After receiving her doctorate, she gained a position with Virginia Stage Company in their educational division to create curriculum and study guides for shows. Le May says, “Through Dramaturgy I get to continue in my love of history and research, while working with playwrights, directors, actors and designers. I love the chance to work with a production team again and am excited for this collaboration with my colleagues from other Community colleges.”

Henderson was interested in giving VGCC drama students the opportunity to work so closely with a playwright and dramaturge, and to have these theatre professionals be a part of the rehearsal process. “Not many young actors get to have such an experience,” says Henderson. Both Stinson and La May will also be attending performances of Geisha, where they will take part in a talk-back discussion enabling audiences to ask questions of the cast, crew, playwright, and dramaturge. Talkback discussions will occur immediately following the Friday and Saturday evening performances and there is no extra charge for the audience to attend.

The cast and crew are comprised of both VGCC and Early College students (Vance and Warren Counties). Actors include: Savannah Morgan, Brian Johnson, Mary Parish, Rose O’Malley, Daniel Thorpe, Kathleen Zoldos, Blake Lee, and Ashley Ayscue. Brother and sister Matthew and Rebekah Varker serve as Stage Managers. Production crew includes: Lane Wade, Josh Nehy, Ronnie Brodie, Tre’quan Johnson, and Amanda Cease.
Admission is $15 for the general public, and $10 for students and VGCC employees. Tickets may be purchased at the door, but attendees are encouraged to secure their seats by purchasing tickets online.

Tickets can be purchased at Eventbrite