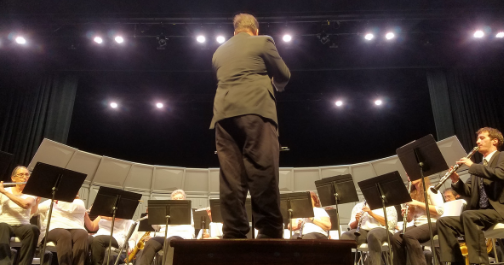 On Monday, December 2, 2019, the Vance-Granville Community College Band will present its Winter Concert at 7:30 PM in McGregor Hall in downtown Henderson, NC.  The concert is free to the public and will last about an hour.

Brian Miller, the conductor of the band, commented that the band is playing classics of band literature.  “All of our music is good, solid, traditional band music”, said Miller.  “We will open with Sousa’s “Manhattan Beach March” and will close with his “Century of Progress March”.  “No band concert is complete without Sousa, for Sousa is the greatest band composer of all time.  His music has universal and timeless appeal”,  commented Miller.

In addition to the Sousa marches, the band will perform some light classics that include a transcription of Shostakovich’s “Waltz No. 2”, and themes from Wagner’s “Tannhauser”, incidentally considered by Sousa to be the greatest operatic composition of all time.

A chief focus of the concert, of course, is seasonal holiday music.  Claire Ramsey will read “The Night Before Christmas” with a special band accompaniment.  Audience members will hear such traditional favorites as “Blue Christmas”, “It’s Beginning To Look A Lot Like Christmas”, and a medley entitled “Christmas Around The World”.

The Old Vanguard Woodwind Quartet will perform in the middle of the concert and will have some special Beatles transcriptions that the audience will recognize and appreciate.

“Band concerts are very old-fashioned and traditional”, said Miller.  “What a great way to start the Christmas season!  We are pleased to present this wonderful music in the middle of historic downtown Henderson.  McGregor Hall is such a terrific performance venue.  We are so fortunate to have such a facility in Henderson.”

Miller, in addition to conducting duties for the Vance-Granville Community College Band, teaches online Music Appreciation courses for Vance-Granville.  He is the band director and assistant administrator for Crosscreek Charter School in Louisburg and plays the pipe organ at Louisburg Baptist Church.  Prior to coming to Crosscreek and Vance-Granville, Miller was the longtime director of the Louisburg High School band program.

“Please tell everybody you know about our concert”, concluded Miller. “It will be fast-paced, interesting, and should leave you humming favorite tunes.  The VGCC Band strives to be ambassadors of music in our multi-county service area.  It is our pleasure to present this beautiful traditional music to the public.”