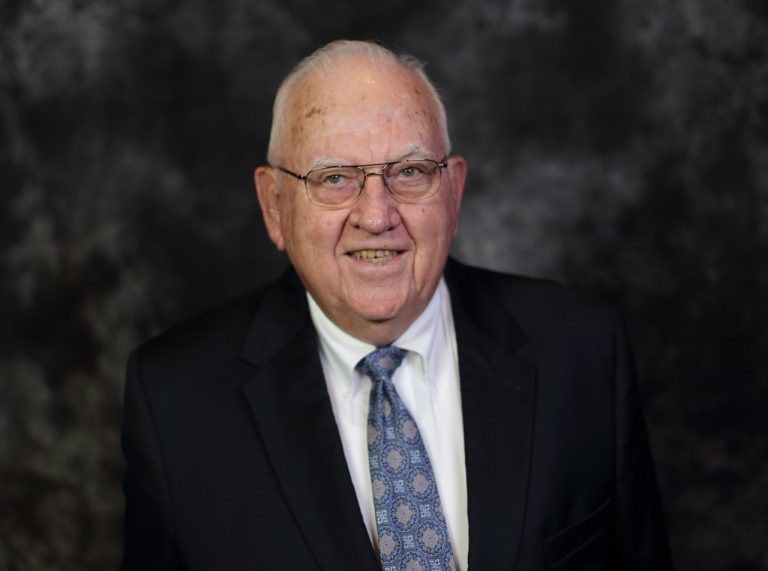 Now retired and living with his wife, Sylvia, in Durham, Pete Burgess was for decades a Vance County farmer and community leader. He was instrumental in establishing the Vance County Regional Farmers Market, which opened in 2014.

After growing up on a Vance County farm, Burgess went to N.C. State University to study agricultural engineering on an ROTC scholarship, and then served in the United States Army. He worked as a safety engineer in the insurance industry for several years, but returned to Vance County in 1968 to run a farm that had been in his wife’s family. At “Burgess Farms,” he grew tobacco, grain, hay and sweet corn, among other crops.

“We are proud to establish this scholarship to express our appreciation to Pete Burgess for his many years of service to the Farm Bureau, the farming community and Vance County as a whole,” said Thomas Shaw, president of the Vance County Farm Bureau, which Burgess once led. “A great storyteller and advocate, Pete has been instrumental in supporting and bringing together many local partners for the benefit of us all, including our local schools, the Cooperative Extension service, the Perry Memorial Library and the regional Farmers Market.”

The new gift continues a tradition of the organization’s generous support for education. Years ago, the Vance County Farm Bureau endowed an academic achievement scholarship at VGCC, which supports a student each year.

“Throughout his life, Pete Burgess has demonstrated an interest not only in agriculture but in giving back and supporting his community, so this scholarship is a fitting way to honor his service,” said Eddie Ferguson, VGCC’s endowment fund director. “We are grateful to the Vance County Farm Bureau for continuing to support Vance-Granville students through this new scholarship.”

“At Vance-Granville, our students are the Vanguards, which means they are ‘leaders,’ and Pete Burgess is the definition of a leader,” said Dr. Rachel Desmarais, the president of VGCC. “Thanks to the Vance County Farm Bureau, we can look forward to awarding the Pete Burgess scholarship to future leaders who can follow in his footsteps.”

Through the Endowment Fund, VGCC has awarded more than 9,700 scholarships to students since 1982. Scholarships have been endowed by numerous individuals, industries, businesses, civic groups, churches and the college’s faculty and staff. Tax-deductible donations to the VGCC Endowment Fund have often been used to honor or remember a person, group, business or industry with a lasting gift to education.

The Vance County Farm Bureau is encouraging friends of Pete Burgess to make donations to the Endowment Fund to help endow this scholarship at the Presidential Merit Award level. For more information or to make a contribution, call Kay Currin at (252) 738-3409.

Contributions to the scholarship fund can also be mailed to the Vance-Granville Community College Endowment Fund, at P.O. Box 917, Henderson, NC 27536.