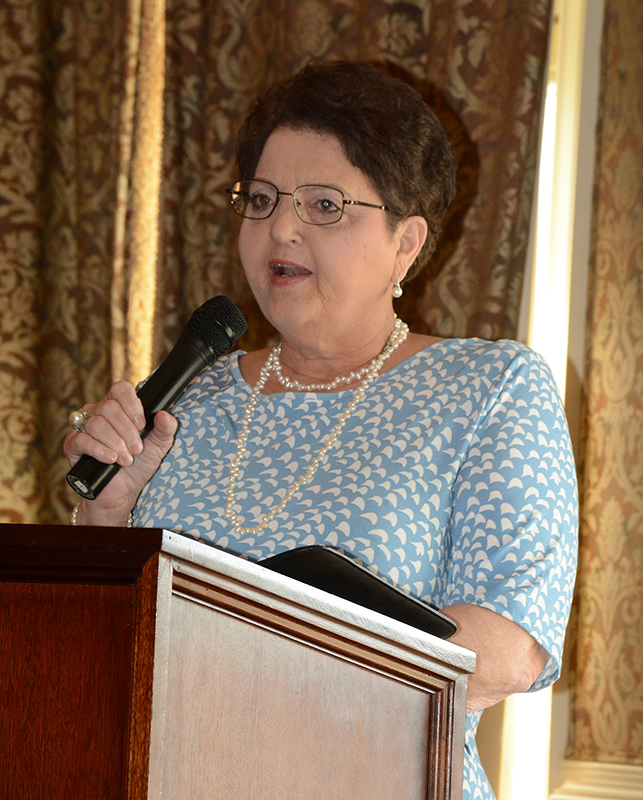 * Pictured above: Faith Harris speaking at the VGCC Endowment Fund Golf Tournament in May of 2019 as part of the celebration of the college’s 50th anniversary.

Students at Vance-Granville Community College today may not realize that they have the opportunity to learn from someone who was a student when their school was brand-new.
Faith Harris has served for the past several years as program head for information technology at VGCC, but her association with the college goes back 50 years, before it was even called a “college.”

“I started my education with what became VGCC in 1969, when I studied with Gray Pernell at the Vance Hotel on Williams Street in Henderson,” Harris recalled. Vance County Technical Institute had just recently opened, and Elsie Gray Pernell was its very first faculty member, overseeing adult education. The new school held classes in the old hotel and in other locations for a few months, before establishing its first campus in the former Maria Parham Hospital building on Chestnut Street in Henderson.

“I then had the great honor of graduating in the first class in 1970,” Harris said. “We did not have a civic center or auditorium, so the graduation took place at E.M. Rollins Elementary School. We had 21 students in our graduating class. Some were as young as their teens, up to one man who was in his seventies.”

Harris went to work for Roses Stores, Inc., where, she recalled, Mr. L.H. Harvin, the company president, supported his employees continuing their education. So she continued taking classes at what was by that time called Vance-Granville Community College. “I worked during the day and took classes during the evening, graduating in 1990 with an Associate in Applied Science degree in Business Computer Programming,” she said.

Like many VGCC students, then and now, Harris used her education to advance in her career, as she continued to work full-time. She was on the cutting edge as computers became increasingly important in the business world. “I was working in End User Support and was promoted to Senior Manager,” Harris recalled. “One day, my vice president, Len Priode, called me into his office and said, ‘Faith, I want you to work with IBM and Memorex Telex and install a Local Area Network (LAN) for Roses.’”

LANs, which are networks that connect computers in a limited area such as a single business, had only just started to become commonly-used at the time. “I had never heard of a Local Area Network, but I took the challenge and installed the first Local Area Network that Roses’ home office ever had,” Harris said.
With the support of her family and Roses, Harris continued pursuing her education, earning a bachelor’s degree at Barton College and, later, a master’s degree with a concentration in Information Systems Security at Colorado Technical University.

“My knowledge in computer networks and security continued to grow, and one day, I received a call from Marsha Nelson at VGCC,” she recalled. “She told me VGCC was going to start a Networking curriculum and asked if I would consider coming to VGCC and helping to start it. I agreed and, in 2000, I went to work at VGCC as an instructor.” Of course, technology continued advancing at a rapid pace. “On my first day, I was told I would need to learn to program Cisco routers and get a certification in Cisco, create a class, and begin teaching it,” Harris said.

She has continued rising to challenges to help provide students with the skills they need in a rapidly-changing world. Harris has administered a Microsoft IT Academy program that has allowed students to earn a number of different industry-recognized certifications. In addition to teaching, she took on leadership responsibilities as program head for Information Technology, which includes Networking , Simulation and Gaming , Healthcare Informatics , Cyber Security and Business Support . “I could not have accomplished any of this without my family, Roses, and VGCC,” Harris said. “It takes a community to make things happen and I want to thank everyone that helped me on my journey.”