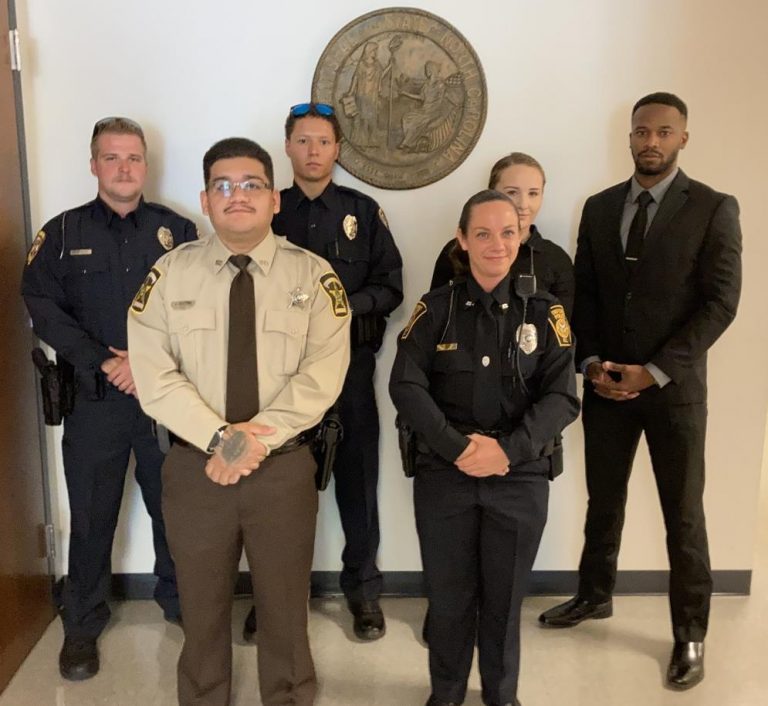 Vance-Granville Community College held a graduation ceremony for the seven cadets of Basic Law Enforcement Training (BLET) Class 112 on June 15, 2021. After passing the state certification exam, all seven are authorized to work in any law enforcement agency in North Carolina. Members of this class have been hired by the Oxford Police Department, the North Carolina State Highway Patrol, Henderson Police Department, Youngsville Police Department and Warren County Sheriff’s Office.

Graduates included Jose Deleon and Kaleb Evans, both of Henderson; LeDrevion Richardson of Jacksonville; Jennifer Quick of Louisburg; Reed Danehy and Kameron Gregory, both of Oxford; and Regina Andranowska of Youngsville.

Three cadets received special awards in three categories. Evans won the “Top Gun” Award for having the highest overall firearm score. Quick took home the Academic Achievement Award for having the best grade average in the written tests each cadet must pass. Richardson earned the Physical Fitness award for scoring highest in the various fitness tests that the cadets undergo.

Evans noted that the greatest benefit he had received from the program was the knowledge and experience of his instructors. “We learned all of the necessary information needed for the completion of the course, while also gaining insight into our chosen career path from the many years of experience that our instructors have acquired over their time serving their communities,” Evans said.

Quick added that the instructors “allowed us to start networking early in our career and took the time to work with each cadet to make sure we understood the material and had the knowledge to succeed in an increasingly difficult profession.”

Danehy said that the VGCC BLET program “goes above and beyond to teach students basic to advanced skills that they can take with them every day on patrol.”

Area law enforcement agencies often partner with VGCC to train their new recruits, as the community college runs one of the most rigorous law enforcement academies in North Carolina – requiring substantially more training hours than the state minimum mandates. For more information, call VGCC at 252-492-2061 or visit vgcc.edu.