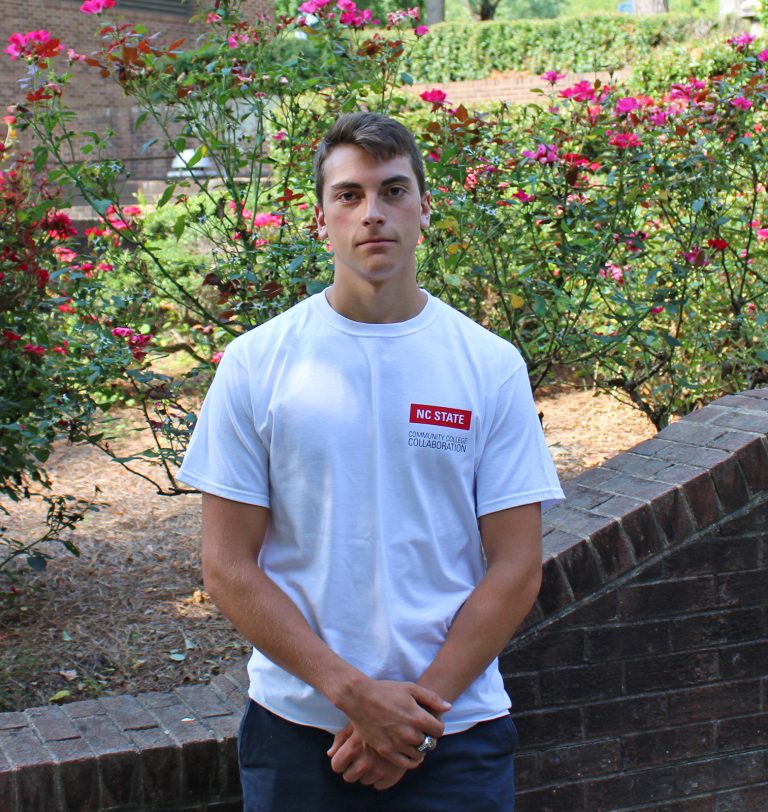 Ethan Cole starts his first semester as a full-time student at North Carolina State University on Aug. 21, making history as a pioneer in a partnership between that university and his former school, Vance-Granville Community College.

Cole, who hails from Kittrell, enrolled at VGCC after graduating from Franklin Academy High School in 2017. The next year, VGCC joined N.C. State’s Community College Collaboration, or “C3,” program, and Cole was among the first to sign up. Essentially, that meant he would apply for dual-enrollment and then be guaranteed admission to NCSU to earn a baccalaureate degree, once he had completed an associate degree at VGCC while maintaining good grades.

For Cole, it was an ideal way to pursue a longtime dream. “I already knew I wanted to go to N.C. State when I first enrolled at Vance-Granville,” he said. “I’ve had that goal for many years. My dad went there, we’re Wolfpack fans in my family, and I knew it was a good school for things like business and engineering.”
The new C3 program presented Cole with a chance to “a foot in the door to the university,” he said. “Not a whole lot of people knew about it at the time, but it seemed like a good avenue to go down, so I went for it.”

Cole completed what he recalled as a straightforward NCSU application process, was accepted, and met with Martha Harmening, the C3 director from the university, for advising. She came to the VGCC campus, so Cole did not even have to drive to Raleigh. “She helped me to know the right classes for my major,” Cole said. “I told her that initially I had been thinking I would study business administration after transferring from VGCC to N.C. State, but then I started thinking about moving to engineering, particularly mechanical engineering. She explained the criteria and the classes I needed to be accepted specifically into the engineering program.”

By enrolling in C3, Cole was technically an NCSU student, even though he was only taking VGCC classes. Getting into the competitive engineering program was never guaranteed, however. After graduating from Vance-Granville with an Associate in Science earlier this year, Cole took a single Chemistry class at another community college in order to become eligible for his chosen major. “I’ve now been accepted into the engineering program,” he said. “I am particularly interested in engineering on the automotive side, developing newer, more efficient vehicles.” With his VGCC credits in hand, Cole is scheduled to graduate from the university in 2022, for a total of five years in higher education.

He feels that the community college has prepared him well for the next level. “One of the best things VGCC has is the atmosphere of being around other students who are focused and trying to do their best, and that keeps you focused, too,” Cole reflected. “Also, the teachers are down to earth and give extra time and attention to their students.”

Cole excelled as a student, earning Presidential Scholar Award-level endowed academic scholarships, making the Dean’s List and working as a peer tutor at the VGCC Academic Skills Center.  Now, he is looking forward to new experiences at N.C. State, continuing to learn and preparing to start a career.

“The C3 program helps students to transfer and to have a guaranteed spot at N.C. State,” Cole said. “I would recommend it to people who want to get a four-year degree, especially if they are still searching for what they want to major in, because it gives you some security and another option.”

Students who may apply for C3 include graduating high school seniors as well as current community college students who have completed less than 30 credit hours of college work.