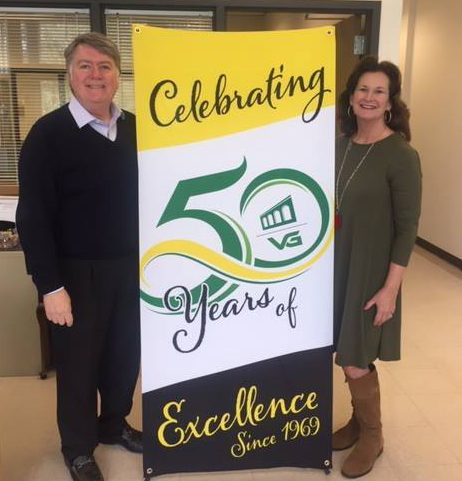 Eddie Ferguson, who has served as endowment director and will continue to serve as executive director of the foundation, said that along with the name change comes a broadening of its mission.

“Over the years, the primary purpose of the Endowment Fund was to raise monies for students to attend VGCC,” Ferguson explained. “However, in recent years, the needs of the college have expanded to include not only scholarships, but also funding for new programs, new buildings, or repurposing existing space. State and county resources have not been available to fund all those initiatives, so we feel that becoming a foundation will increase our ability to seek donations and grants from a wide variety of individuals, businesses and other foundations.”

The VGCC Foundation will continue to oversee the endowing of scholarships, as well as contributions that can support the overall mission of the college. In addition, the Foundation will secure grants from private and public sources to support college programs, whether they are in the curriculum (credit) or continuing education divisions.

“For decades, Vance-Granville has enjoyed strong support from many donors and businesses in our community, for which we are grateful,” said VGCC President Dr. Rachel Desmarais, who serves as the Foundation’s board chair. “We look forward to continuing to build on that legacy with the VGCC Foundation, which will play a key role in helping us meet the growing needs for education and training in our region.”

College leaders first established the Endowment Fund in 1976 to receive scholarship donations and other contributions. The fund became inactive but was reactivated in 1982 by the president of the college at the time, Dr. Ben Currin. Since then, the Endowment Fund has received more than $7 million in gifts, which has enabled more than 9,700 scholarships to be awarded to students. Scholarships have been endowed by numerous individuals, industries, businesses, civic groups, churches and the college’s faculty and staff. Tax-deductible donations have often been used to honor or remember a person, group, business or industry with a lasting gift to education. That will continue to be the case with the foundation.