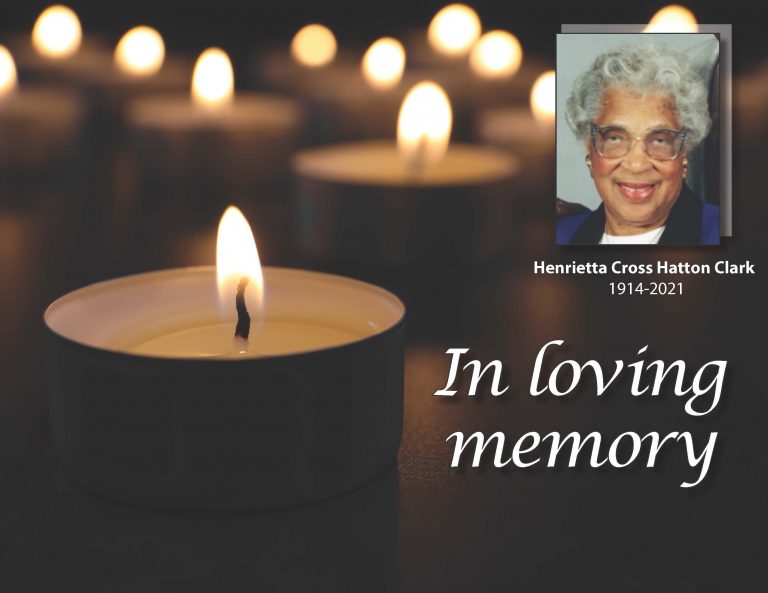 Vance-Granville Community College mourns the loss of Henrietta Cross Hatton Clark, a former member of the VGCC Board of Trustees and an exemplary citizen of Vance County. Ms. Clark passed away on Wednesday, March 3, 2021, at 106 years old.

Ms. Clark was a member of the Vance-Granville Community College Board of Trustees from 1993 to 2011.

Jerry Stainback, close friend to Ms. Clark and Vance-Granville’s legal counsel, said that as an educator herself for 40 years, Ms. Clark believed quality education was a real difference maker in a person’s life, regardless of race, creed, or color.

“She really enjoyed her time on the Board of Trustees at VGCC, and she believed that VGCC could be the engine to help drive Vance and Granville counties to significant economic development and improvements,” he said.

Abdul Rasheed, longtime VGCC trustee, served alongside Ms. Clark during her time on the board.

“Ms. Clark was a trusted community leader who always attempted to move the community forward for the good of all citizens,” he said. “She was a pleasure to work with and follow.”

Ms. Clark was born in Vance County and grew up on a farm with her parents and six siblings. She graduated from Henderson Institute in 1934 and attended Winston-Salem Teachers College, (now named Winston-Salem State University). While there she played basketball, before graduating in 1938.

After graduating, she taught passionately for 40 years and even after her retirement she continued to do what she loved and volunteered as a tutor.

Ms. Clark also loved her community. She participated in the Vance County branch of the NAACP, served on the Vance-County Alcoholic Beverage Control Board, including a stretch as the chair, and acted as an elder at Cotton Memorial Presbyterian Church. She was founding member of the Henderson Appearance Commission, as well as a member of the Daisy Garden Club, and worked with the NC Federation of Garden Clubs. She also founded the Henderson Winston-Salem State University alumni chapter.

Ms. Clark was recognized more than once for her commitment to her community. In 1989, she was selected as Vance County Citizen of the Year. In 2005, she received the NAACP Community Service Award. Two years later, Clark was honored as one of the three founding members of the Appearance Commission during an Arbor Day celebration by the planting of a Japanese Maple. In 2011, Mayor Pete O’Geary presented her with a certificate of appreciation from the City of Henderson for her many years of service to the commission.

On her 100th birthday, the Vance County Board of Commissioners declared September 14, 2014, Henrietta Clark Day in Vance County.

The VGCC Vanguard family sends our condolences to the family and friends of Henrietta Cross Hatton Clark and gives thanks for her leadership and service.