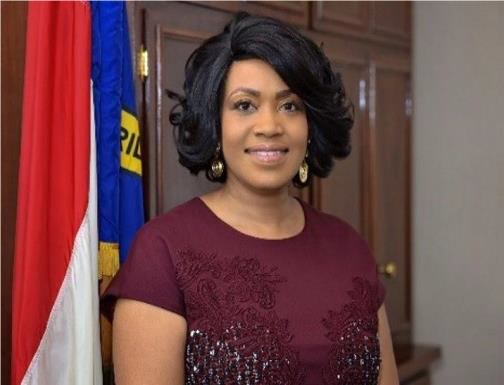 During her visit, Secretary Sanders discussed the recently-released “Status of Women in North Carolina Health & Wellness” report, commissioned by the Council for Women & Youth Involvement. The Council is a division of the Department of Administration.

The report is the second in a series of four publications that provide data and policy recommendations to improve the status of North Carolina women in several key areas. The first report in the series, “The Status of Women in North Carolina: Employment & Earnings,” was released in 2018. The third report will focus on factors related to women’s economic security and economic opportunity, and the fourth on women’s political participation. The series aims to serve as a resource that may be used to make data-driven decisions about how to shape public policies, prioritize investments, and set programmatic goals to improve the lives of women and families.

Governor Cooper appointed Sanders as Secretary of the N.C. Department of Administration on January 12, 2017. A native of Belhaven, N.C., Sanders brings to the Cooper administration experience in both management and leadership. She is a seasoned pharmaceutical and biotechnology executive who has held the role as vice president of manufacturing and general manager of Biogen’s largest and most advanced manufacturing facility in Research Triangle Park.

Sanders holds a Bachelor of Science in Biochemistry from N.C. State University and a Master of Health Administration from Pfeiffer University. As a native North Carolinian, wife and mother of twin daughters, she is passionate about improving the status of women in the state. Some of her work includes creating a Women’s Innovation Network at Biogen. As Sanders puts it, “Improving the status of women in North Carolina is not just a woman’s issue. This is a family, poverty and economic issue.”