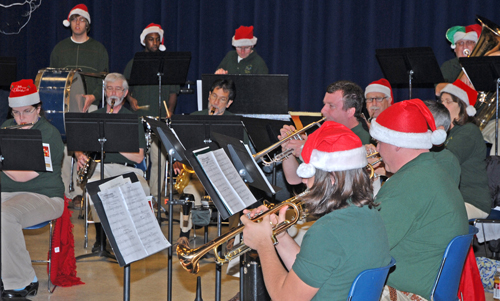 The VGCC Community Band will present its Winter Concert on Monday, December 12, at McGregor Hall on Breckenridge Street in downtown Henderson. The concert will begin at 7:30 p.m. and will last approximately one hour. There is no charge for admission.

The public is invited to this performance, which will feature a variety of music, including traditional band marches by John Philip Sousa and Karl King, a medley of songs from the 1949 Broadway musical, “South Pacific,” Leroy Anderson’s “The Syncopated Clock,” a unique collection of Mexican heritage songs in “The Mexican Overture,” and a large variety of Christmas favorites.

“After the pandemic years, we are celebrating the return of the Community Band, and we are so excited to be back in McGregor Hall,” said Betsy Henderson, Department Chair of Fine Arts and Humanities for VGCC. “This concert is free of charge and a fun night out for all ages. We might possibly have a very special ‘Christmas visitor,’ as well.”

The band is conducted by Brian D. Miller of Louisburg and features musicians from the college’s four-county service area, as well as Virginia. If you are interested in being a part of the VGCC Community Band, please contact Betsy Henderson at hendersonb@vcc.edu .