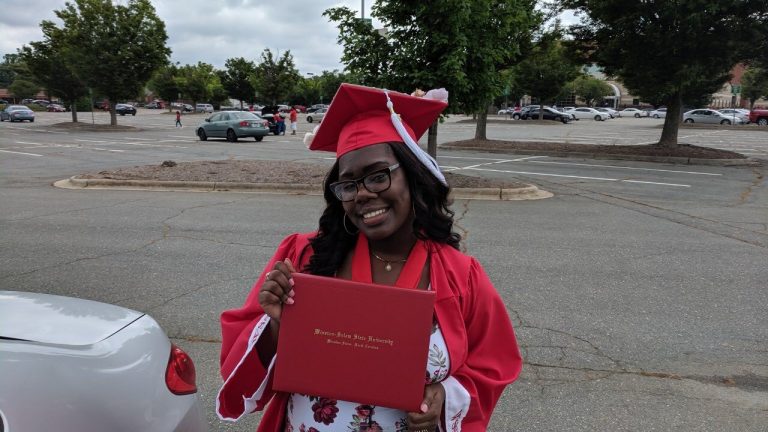 Oneisha Rebecca Leonard came to Vance-Granville Community College in 2011 as a Granville Early College High School student. “I was a good student, with mostly A’s and B’s, but I was not as focused on school as I should have been until I began taking classes at Vance-Granville,” Leonard recalled. She said that because of her college classes, “I became more focused on my future.”

Leonard said that VGCC prepared her for the next level of education by helping her hone not only her academic skills, such as writing and papers and doing research, but also her time management skills. Eventually, she transferred to Winston-Salem State University. “Vance-Granville gave me the tools I needed to succeed in college by preparing me for what to expect and what was expected of me,” Leonard said. “My instructors at Vance-Granville were, and still are, some of the best instructors I have ever had.” She credits her academic experience at VGCC with setting the stage for her to make the dean’s list every semester at the university. She also became a student leader, as a member and chapter president of Sigma Tau Delta, the international English honor society. “I also presented at the South Atlantic Modern Language Association Conference this past November in Birmingham, Alabama, where I gave a presentation on my research on post-colonialism and psychoanalytic theory as it related to western colonization,” Leonard said.

With her VGCC credits and preparation, Leonard was able to graduate a year early from Winston-Salem State University in May 2019 with a bachelor’s degree in English. Now, she is preparing to attend graduate school. But she still appreciates where her higher education began, saying, “I would like to thank Vance-Granville Community College for all they have done for me, while I attended and after I left.”