Williams appointed to VGCC board of trustees 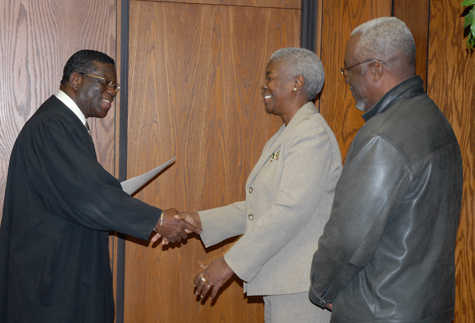 Dr. Doris Terry Williams of Henderson became the newest member of the Board of Trustees of Vance-Granville Community College on Dec. 7, when she was sworn in by Ninth District Court Judge Henry Banks in a brief ceremony on the college’s main campus. Dr. Williams was appointed by Gov. Beverly Perdue to the seat formerly held by Grace Vickery of Henderson until her death in August. Williams’ term will expire in 2012.

Though new to the board, Williams has been involved in education issues for many years. On the local level, Williams served on the Warren County Board of Education for twelve years, including five as Board chairperson. Professionally, she is currently the executive director of the Rural School and Community Trust and director of the Trust’s Capacity Building Program. The Rural Trust is the leading national non-profit organization addressing the crucial relationship between good rural schools and thriving rural communities.

She holds Ed.D. and M.Ed. degrees from North Carolina State University and an A.B. degree from Duke University.

Above: From left, District Court Judge Henry Banks congratulates Dr. Doris Terry Williams after administering the oath of office to her as a new member of the VGCC Board of Trustees , while her brother, Robert Terry, Jr., looks on. (VGCC photo)