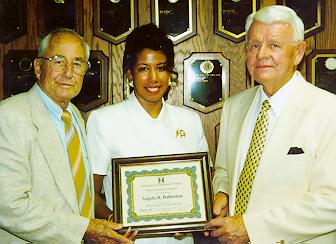 At their regular board meeting on May 19, Vance-Granville Community College’s trustees moved ahead on construction and renovation plans for the college’s satellite campuses in Franklin and Granville counties and gave recognition to an outstanding faculty member.

With chairman John T. Church, Sr., presiding, the board cited Angela Ballentine, radiologic technology program head/instructor, who was VGCC’s 1996 nominee for the Excellence in Teaching Award. She represented the college in the statewide competition for this award last November in Raleigh. (Angela is shown in the photograph at left with Mr. Church, left, and John K. Nelms, vice chairman of the board.)

David Brooks, building committee chairman, announced that construction plans for the Franklin County Campus have been sent to the Department of Insurance for final approval by the State Board of Community Colleges. “Once the approval is confirmed, we will be able to receive bids on the work,” he said. Construction is slated to begin this summer and to be completed in time for the opening of the fall term in 1998.

Brooks also reported that he and Dr. Ben F. Currin, VGCC president, were advised in early May by the Granville County Commissioners that local funds totaling approximately $320,000 have been designated for the matching of State bond funds to expand the facilities at South Campus. And “while the Board has not designated a specific date to begin this project, the funds have been set aside and earmarked for that use,” according to Mick W. Berry, Granville County Manager.

Plans call for adding a 6,000 square foot wing to the existing building on the campus, located between Butner and Creedmoor, to accommodate the increasing enrollment. Currently the campus serves 250 full time students each semester, with another 1,500 served each year for single classes or retraining.

New construction would provide a new cosmetology lab, computer lab, and nursing assistant and emergency medical training lab. Through renovations, the existing cosmetology lab would be divided into a science lab and general classroom for radiography students. Other improvements would convert a classroom into office spaces, staff lounge and a larger bookstore facility.

After discussion of the project, the trustees approved Dove-Knight and Associates of Rocky Mount as the architectural firm for the South Campus addition.

The board also agreed to request from Vance and Granville counties $100,000 in capital outlay funds (1997 98) for needed improvements on Main Campus. The money would be used for roof replacement and repairs, boiler chimney work, interior and exterior lighting needs, and repair of damaged concrete steps and walkways.

Acting on a motion by Michele Burgess, personnel committee chairperson, and a recommendation of the administration, the board approved the April 11 resignation of Patricia F. Stanek as instructor of General Office Technology. In like fashion they approved the full-time employment of Paula M. Chesnaky as instructor of nursing, effective June 16.

Members also okayed the Application for Multi Campus College Designation for VGCC, which has been submitted to the State Board of Community Colleges for approval. VGCC must be afforded this designation in order to be eligible for any operational funds that may become available in the future.

Next, the board approved an increase in VGCC DayCare fees, effective July 1, as follows: full-time toddler – from $350 to $375 per month; other full-time children – from $320 to $345 per month. Other fees for part-time children will be prorated and increased according to age and hours of attendance.

Other information shared by the president included the following:

(2) Houses No. 19 and 20, built as training projects by VGCC vocational classes, have been sold for a combined net profit of $12,774. These funds are applied to scholarships for deserving students and to the purchase of materials for future house projects.