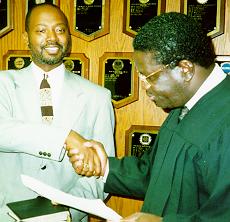 Vance-Granville Community College Trustees approved the awarding of bids in excess of $3 million for construction of a new Franklin County Campus at their bimonthly meeting Monday, July 21.

That action highlighted a lengthy business session, which was preceded by a swearing-in ceremony for new board member D. Bernard Alston, a Henderson attorney. J. Henry Banks, Ninth District Court judge, administered the oath of office.

The meeting was held in the board room on Main Campus.

After recommendation by Dove-Knight & Associates, architect, the board approved the awarding of base bids in the amount of $3,145,723 for the new Franklin County Campus and decided to award alternates contingent upon availability of funds.

Brooks also reviewed an architectural rendering for the new addition to South Campus. This expansion will include a new 8,050 square-foot wing that will provide an additional 6,000 square feet in usable classrooms along with additional parking spaces.

Granville County Commissioners already have approved $342,404 in funds to match state monies designated for the expansion.

Appointed by the Vance County Board of Commissioners, Bernard Alston replaces Dr. James E. Kenney, who completed his four-year term at the end of June. In the photograph at left, Alston is shown on the left as he is sworn in by Judge J. Henry Banks.

The new trustee is a native of Vance County, attended Henderson schools, and earned the J.D. degree from the University of North Carolina at Chapel Hill. He has practiced law in Henderson for a number of years. He and his wife, Dr. Lei Charlton-Alston, and their son, Malcolm, reside at 231 Daniel Boone Trail.

Along with Dr. Kenney, Kathryn Bradley of Oxford, the college’s SGA president, retired as student trustee after serving during the 1996-97 year. She received a plaque of appreciation for her service to the board. Dr. Kenney will be recognized at a later date.

The board likewise moved to accept the financial statement audit report for the year ending June 30.

The members also OK’d the amended 1996-97 Budget Resolution in addition to approving the 1997-98 county current and capital outlay budgets.

Foster reported on current expense budgets as approved by local boards of commissioners in the four-county area, as follows:

Vance County will provide $556,000 and Granville County $185,333 for the operation of Main Campus. Granville County likewise will contribute $71,137 for South Campus. Warren and Franklin commissioners approved $45,000 and $27,935 for satellites in their counties, respectively.

No final figures are available for the 1997-98 state budget at this time, since the General Assembly has not yet acted on a budget for community colleges, Dr. Currin told the group.