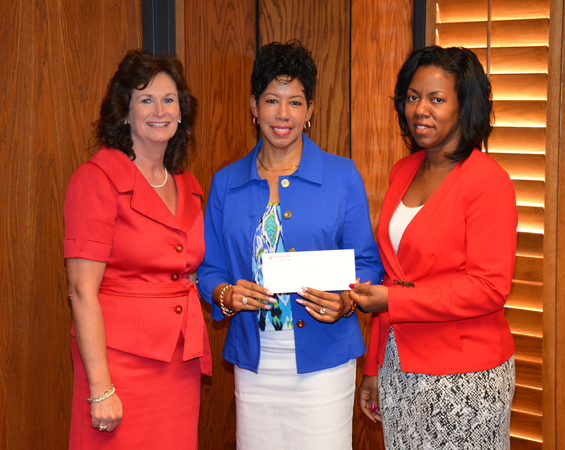 Dr. Angela Ballentine, the vice president of academic and student affairs at Vance-Granville Community College, has established a new scholarship for students at the college where she has served for more than 20 years. Ballentine has named this new scholarship the “Charles and Audrey Ballentine Academic Achievement Scholarship,” in memory of her parents. Her father and mother, who passed away in 2003 and 2013, respectively, were both educators in Rockingham County.

“My parents were public school administrators and community leaders, but more importantly, they were passionate about education,” Dr. Ballentine said. “They dedicated their lives to teaching and learning and giving back. I believe they would be humbled by the naming of this scholarship because it demonstrates that their passion lives on, not only through their daughter, but through the opportunity this scholarship will afford to deserving students.”

In awarding the scholarship, preference will be given to students in the VGCC Radiography degree program .

Ballentine has worked at VGCC since 1991, first as an instructor and then as program head for Radiography. In that capacity, she was named VGCC Faculty Member of the Year in 1996. Ballentine later served as Dean of Health Sciences, as Vice President of Instruction, and as interim president of the college in 2011-2012, before becoming Vice President of Academic and Student Affairs.

In her current position, Ballentine is responsible for the staffing, program planning, oversight, budgeting, quality, integrity, research, implementation, and development of all VGCC educational programs and student support services at the college’s four campuses. She received a VGCC President’s Leadership Award in 2010 after she was instrumental in the creation and implementation of the four Early College High Schools that VGCC operates in partnership with local public school systems.

“During more than two decades as an instructor and a leader at Vance-Granville, Angela Ballentine has been devoted to educational excellence,” said Dr. Stelfanie Williams, president of VGCC. “This scholarship shows that she always puts the needs of students first, and it also serves as a lasting tribute to an outstanding family of educators.”

A Rockingham County native, Ballentine earned both a bachelor’s degree in biology at Greensboro College and a certification from the Moses H. Cone Memorial Hospital School of Radiologic Technology in 1987. She worked as a radiologic technologist and mammography specialist for several years before joining VGCC. She later earned both a master’s degree in adult and community college education and a doctorate in higher education administration at North Carolina State University.

The scholarship comes on the heels of another established by the president of the college, Dr. Stelfanie Williams. “I’m proud that our dedicated senior executives are so committed to giving back to our students,” said Kay Currin, VGCC’s endowment specialist. “They have set a wonderful example for their fellow leaders and for the community that we serve.”

Through the Endowment Fund , VGCC has awarded more than 7,000 scholarships to students since 1982. Scholarships have been endowed by numerous individuals, industries, businesses, civic groups, churches and the college’s faculty and staff. Tax-deductible donations to the VGCC Endowment Fund have often been used to honor or remember a person, group, business or industry with a lasting gift to education. For more information, call (252) 738-3409.