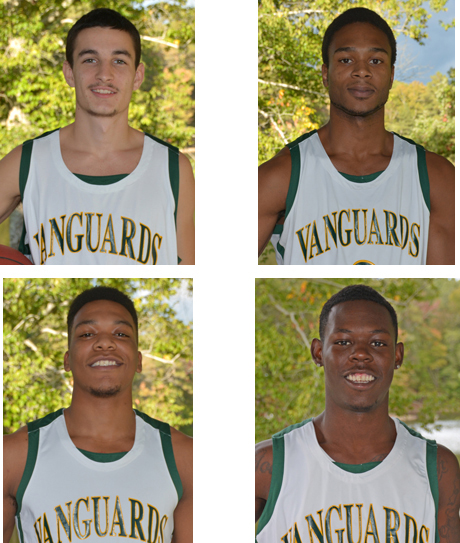 The Vance-Granville Community College Vanguards men’s basketball team closed out the fall semester and the year 2014 with a win on the road and a loss at home.

On Dec. 4, VGCC traveled to face the junior varsity team at the University of Mount Olive. The Vanguards defeated the Trojans in a dominating 80-51 performance. Off the bench, freshman William Bailey of Shelby (pictured above, top left) led the team in scoring, shooting 7-for-10 and scoring 18. Freshman starting forward Antonio Murphy of Fayetteville (pictured above, top right) added 12 points. Murphy and two sophomores, Keyante Lindsey of Stem and Treyvon Rogers of Henderson, contributed nine rebounds apiece. Sophomore Jarrett Ballard of Henderson (pictured above, bottom right) led the team in assists, with five.

The Vanguards returned home on Dec. 8 to host the Wake Technical Community College Eagles. The neck-and-neck first half ended with Wake Tech up 46-44, but the visitors took charge early in the second half and eventually won, 94-78. Sophomore Khadier Fulcher of Stem (pictured above, bottom left) was the Vanguards’ top scorer with 15 points, while also posting nine rebounds. Jarrett Ballard had another solid performance, scoring 13 points and making five assists. With 10 rebounds, Antonio Murphy led his team in that category.

The loss brought the Vanguards’ record to 2-9 on the season. After the holiday break, VGCC returns to action on Jan. 8 with a trip to Lenoir Community College. The team’s first home game of 2015 is set for Jan. 14 at 6 p.m., when the Vanguards host the Patriots from Patrick Henry Community College at Aycock Recreation Center in Henderson.