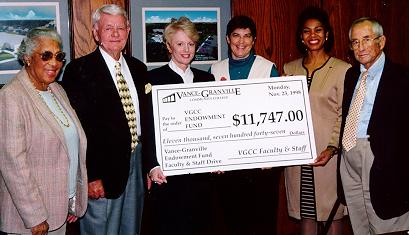 Also at the meeting, the board voted to place a plaque in the classroom building at the new Franklin County Campus to honor Ralph S. Knott for his many contributions to establishment of a satellite campus near Louisburg.

Board Chairman John T. Church Sr. presided at the meeting in the college board room on the main campus.

The budget for next year represents a slight increase over the 1997-98 outlay, which was $19,214,148. Approval of the final budget was later than in most years because the N.C. General Assembly only recently approved the state budget.

Included in the budget are $11,136,220 for operating expenses; $1,008,543 for plant operations at the VGCC campuses in Vance, Granville, Franklin and Warren counties; $719,869 for equipment and books and for building and grounds maintenance of the four campuses; and $6,374,571 for the institutional fund, which includes bookstore operations, vocational projects, scholarships and construction at the Franklin and South campuses.

Funding for the budget comes from state, federal, county and Endowment Fund sources, as well as revenues generated from registration and sales on the campuses.

In the photograph above, the faculty and staff of VGCC conduced another record campaign for the VGCC Endowment Fund, raising $11,747, This brings the total contributed by faculty and staff to more than $100,000 for the scholarship fund. One of the scholarships endowned by the fund will be presented in honor of the retiring president of the college, Dr. Ben F. Curirn. Diane Finch, Phyllis Brady and Mary McMannen, co-chairmen of the faculty/staff drive, presented the contributions to the VGCC Board of Trustees on Nov. 23. From left are Henrietta Clark, board secretary; John K. Nelms, vice chairman; Finch; Brady; McMannen; and John T. Church Sr., board chairman.

The move to honor Ralph S. Knott resulted from a request by the Franklin County Board of Commissioners. The Clerk of Court for Franklin County for 36 years, Knott chaired the Franklin Leadership Committee, which took a lead role in establishing a satellite campus in that county.

Dr. Ben F. Currin, VGCC president, told the board that Knott fought long and hard against stubborn opposition to expand the college to Franklin County. He championed a bond issue, which passed by a 3-1 margin to allocate funds for construction of the campus.

VGCC operated in temporary quarters in the Franklin County Health Department from 1991 until this fall when a new $4 million campus opened for classes on N.C. 56 east of Louisburg. Two buildings of the new campus will be formally dedicated on Nov. 30, and Knott will be honored at that time.

Today, Knott serves as Franklin County liaison to the VGCC Board of Trustees.

Lancaster shared with the local trustees the evaluations of the state system board of the three finalists for the VGCC position. No action was taken by the board, and a selection will be made and announced at a later time.

The trustees voted to again request bids for the third building planned to complete the Franklin County Campus. This building is planned for 6,823 square feet to accommodate industrial skills training.

The original low bid came in at $854,697, and has been lowered to $828,351 by acquiring state funds for equipment. But the new figures are still 28.5 percent above original bids received when the entire three-building campus was proposed.

In other action related to construction, the board voted to accept the bid of $843,800 from D.A Thomas Construction Co. for renovations and expansion of South Campus between Butner and Creedmoor. This was made possible when the Granville County Board of Commissioners agreed to issue a letter of intent to include the budgeted shortfall of $144,192 in its 1999-2000 budget.

College officials hope to acquire the funds from state or other sources before they are needed to complete the project.

Procedures are included in the policy for handling of students who default on payment of tuition and fees.

In personnel actions, the board voted to hire George A. Henderson of Henderson as chief GED examiner. He replaces Rodney A Venable, who resigned Oct. 31. The board accepted the resignation of Venable and of Barbara J. Winston, who is resigning at an instructor in the Commerce Department, effective Dec. 18.

The board welcomed Spencer Noble of Oxford, president of the VGCC Student Government Association, as the new student representative to the Board of Trustees.