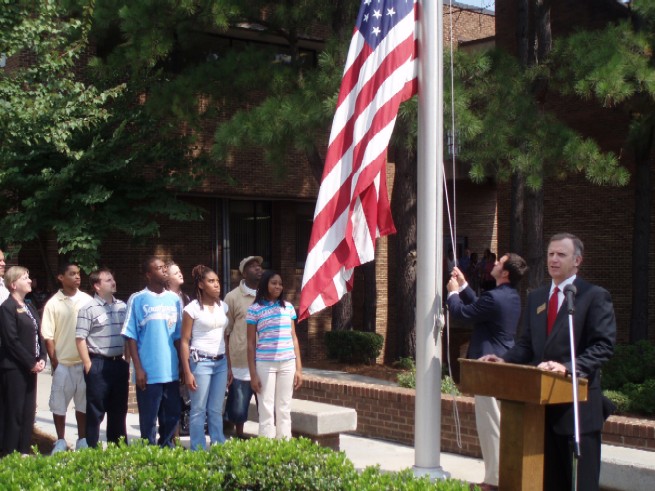 Like many of their fellow countrymen, Vance-Granville Community College faculty, staff and students gathered Monday morning in a solemn ceremony to mark the fifth anniversary of the terrorist attacks of September 11, 2001.  The group, including representatives of the armed services, the Henderson Fire Department and the Henderson Police Department, congregated underneath the flagpoles on the college’s main campus, and wore red bracelets as a silent memorial to the victims.

“We can never return to our world as we knew it on September 10, 2001,” said VGCC President Randy Parker.  Parker remembered those who lost their lives in the attacks, including the first responders who struggled to save lives, and “those men and women that have lost their lives and those that are risking their lives every day on foreign shores for our safety.”  He also singled out the sacrifices of military families and gave thanks for the safety of U.S. Air Force Major Jill Metzger, a Vance County native.

“As we have a prayer and moment of silence across our great land, please remember those that lost their lives five years ago today,” Parker concluded.  He then introduced the Rev. Roosevelt Alston of Holy Temple Church in Henderson, who offered a prayer and reflection.  Rev. Alston cited Paul’s epistle to the Romans, “And we know that all things work together for good” (Romans 8:28).

Then, at 8:45 a.m., five years to the moment after the first plane hit the World Trade Center, the group observed a moment of silence as the American flag was lowered to half-staff and “Taps” was played in the background.

Observers exchanged embraces and tied red bracelets on their wrists as a silent memorial to the victims.

Above: As the American flag is lowered, VGCC President Randy Parker (right, at podium) leads VGCC staff and students in a “Patriot Day” ceremony observing the fifth anniversary of the September 11 tragedy. (VGCC Photo)