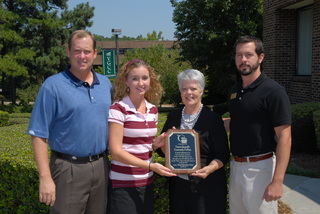 The American Cancer Society recently recognized Vance-Granville Community College for its contributions to Relay for Life in 2007. VGCC held its first mini-Relay For Life event May 2, with near-simultaneous activities at each of the college’s four campuses: the main campus in Vance County, the South Campus between Butner and Creedmoor, the Franklin County Campus in Louisburg and the Warren County Campus in Warrenton. VGCC students, faculty and staff raised $3,782.73 to support cancer research through a variety of means, including bake sales and sales of luminaries in memory or in honor of loved ones who have faced cancer.Above, from left, Bryan Renn of Oxford, community manager for the American Cancer Society, presents a plaque to VGCC Student Government Association Public Information Officer Gabrielle Julius of Henderson, a student in the College Transfer program who was an active volunteer in the 2007 Relay; former VGCC Student Government Association president Joan Ayscue of Henderson; and VGCC Student Activities coordinator Peyton Boyd.The plaque expresses appreciation for the VGCC community’s “outstanding service” and “devotion to excellence in the fight against cancer. Your efforts given to the Relay for Life’s of Franklin, Warren, Vance and Granville counties are greatly appreciated.”Renn, who works for ACS in an area that includes Person, Granville, Durham and Orange counties, thanked everyone who was involved in the Relay, and particularly thanked Ayscue for generating the idea. Ayscue graduated from VGCC in May, but wants to continue to be involved with the VGCC Relay for Life. She expressed her appreciation to all the students, faculty and staff who either attended the May events or purchased baked goods to support the cause.Renn added that the results of the 2007 VGCC event were outstanding, particularly in light of the fact that it was the college’s first such effort. The college’s Student Government Association has expressed interest in sponsoring a Relay for Life again next year. Boyd said that plans are already underway for 2008, in hopes that with more preparation, the event can be even more successful than it was in 2007.