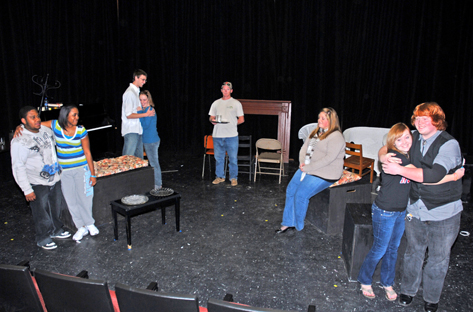 VGCC drama students will stage an adaptation of Oscar Wilde’s “The Importance of Being Earnest”, December 2-5. Performances begin at 7:30 p.m. on Dec. 2, 3 and 4, with matinees at 2 p.m. on Dec. 4 and 5. All performances are in the small auditorium in Building 2 on the college’s main campus in Henderson.

According to VGCC Theatre Arts/Speech instructor Betsy Henderson, the production marks the North Carolina premiere of this new adaptation of the 19th-century play. Raleigh theatre artist Nancy Rich changed the setting from Victorian-era London to the modern South. Otherwise, the play tells the same tale of two young gentlemen who use the same pseudonym (“Ernest”) on the sly. Then, they both fall in love with women using that name, leading to a comedy of mistaken identities. Whenever lead character Jack Worthing slips away to Charleston, South Carolina from his country estate, he says he is going to see his (fictitious) wayward brother, “Ernest.” Once there, he keeps his privacy by calling himself Ernest – luckily so, as his beloved Gwendolen declares she could only love a man named Ernest. Her cousin, Algernon, is the one person who knows Jack’s secret, and one day he travels down to the estate, announcing himself to Jack’s attractive ward Cecily as bad brother Ernest. Cecily is much taken with him and with his name, so on Jack’s return home and Gwendolen’s unexpected arrival, it becomes clear there are both too many and too few “Ernests” earnestly courting.

Admission is $10 for the general public, and $5 for students and VGCC faculty and staff. Tickets may be purchased at the door, but attendees are encouraged to secure their seats by making reservations. For more information and to reserve seats, call Betsy Henderson at (252) 738-3371 or e-mail her .