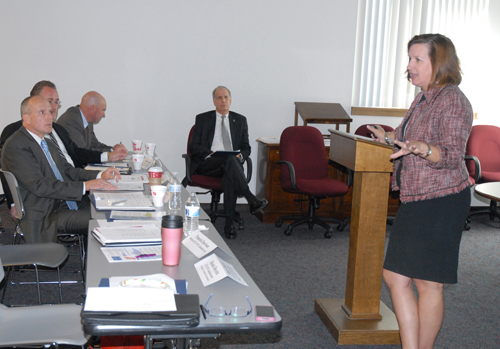 The Durham-based Triangle J Council of Governments organized the informational seminar on Foreign Trade Zone 93 , a designated area that includes all four counties that VGCC serves (Vance, Granville, Warren and Franklin) as well as other counties in the Research Triangle Region. A Foreign Trade Zone (FTZ) is a secure area in or near a port of entry that is considered outside of U.S. “commerce” but is under U.S. Customs supervision. Domestic and foreign merchandise may be admitted to an FTZ without a formal Customs entry. “FTZ 93 stimulates trade in the Greater Triangle Region by creating new jobs in companies engaged in international commerce and encouraging job creation in spin-off industries,” said Renee Boyette, who administers the zone for the Council of Governments. Attendees were welcomed to the seminar by Boyette and by Dr. Stelfanie Williams, the president of VGCC. Later, Cornelia Steinert (pictured above, right), customs house broker and senior manager with PointTrade Services, Inc., explained what Foreign Trade Zones are and why they are important. She explained that goods can be brought into such a zone and be stored, manipulated and processed while maintaining their duty-free status, reducing a local company’s costs and improving supply chain efficiencies.