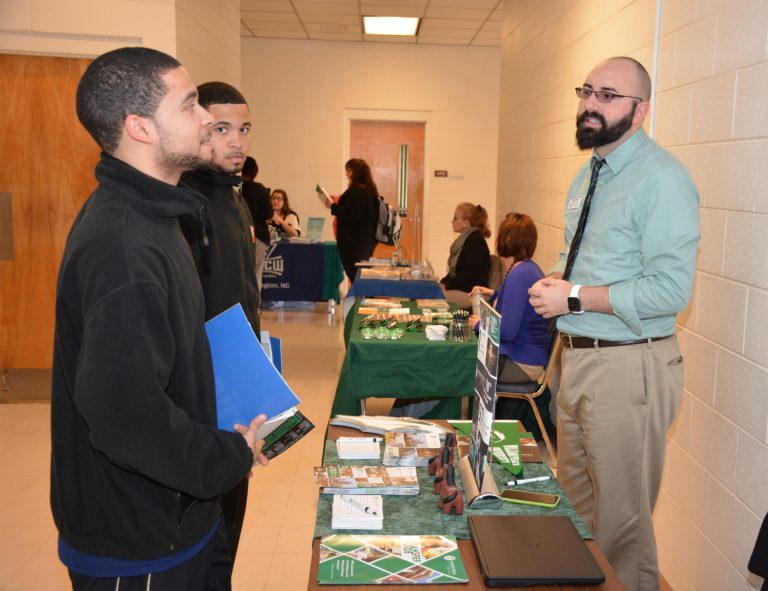 Vance-Granville Community College hosted admissions officers from four-year colleges and universities on Nov. 20 in the Student Learning & Success Center on VGCC’s Main Campus. The event was VGCC’s annual “College Day,” where students obtain important information about transfer requirements, financial aid and scholarships that can help them continue their education.

VGCC students browsed through displays, picked up informational materials, and talked with representatives from 24 four-year schools — believed to be the largest selection ever assembled at the college. Almost all of the represented colleges and universities were from North Carolina. One first-time attendee from out-of-state was Chamberlain College of Nursing, which earlier this year established a transfer agreement with the VGCC Associate Degree Nursing program.

Each year, large numbers of students start their higher education at VGCC before transferring to four-year institutions. VGCC has numerous articulation agreements with four-year schools (both public and private) that allow students to transfer credits in various programs. The VGCC College Transfer program provides students with the first two years of a B.A. or B.S. degree. College Transfer courses are offered at all four VGCC campuses and online. For the fall 2014 semester, a newly revised Comprehensive Articulation Agreement (CAA) between the N.C. Community College System and the 16-campus University of North Carolina System went into effect, promising to improve pathways for students to complete four-year degrees.

High school students in one of the four Early College programs operated by VGCC in partnership with local public school systems can earn up to two years of college-transferable credit, tuition-free. Some Early College students were among those participating in College Day.

For more information on enrolling at VGCC and transfer options, contact the Student Learning and Success Center at studentsuccess@vgcc.edu  or (252) 738-3330, or visit any campus.