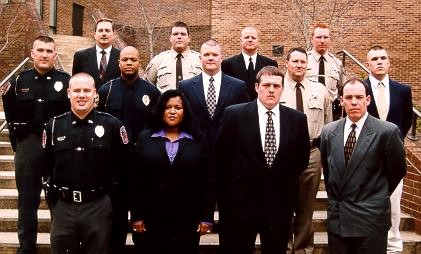 Graduation ceremonies were held for the class Dec. 17 at the college Civic Center.

Sgt. Matthew A. Nies of the Henderson Police Department was the speaker for the graduation ceremonies. He is one of many veteran law enforcement officers from area agencies who share their knowledge with the BLET students, and Class 74 chose Sgt. Nies to be their speaker.
The speaker told the graduates they were leaving on a journey to serve and protect our society and its way of life. “While this is only the first of many steps that journey, it is one of the most significant,” he said. “It shows that each of these students has made a commitment to this career.”

Sgt. Nies told the graduates to never forget in their jobs and their lives that each person holds the key to success and failure and that nothing worth having is ever easy. “The most powerful tool we all possess is our ability to think our way through problems,” he said. “This ability will ultimately decide the outcome of any situation.”

Most BLET students are hired by police or sheriff’s departments who then pay for their training. Sgt. Nies spoke of the dedication of several Class 74 members who took on the economic burden of paying their own ways, hoping to get a position in law enforcement after graduation. Only a few of the graduates have not signed on with an agency, and they report having offers and expect to be working in law enforcement soon.

Tony Pendergrass, coordinator of Law Enforcement Training at Vance-Granville Community College, presented awards to the graduates who finished tops in several aspects of training. Michael Lawson received the Academic Award for the highest average test scores, and he also earned the Top Gun Award for highest proficiency with handgun and shotgun. John Pointer of Roxboro Police Department took the Physical Fitness Award for the highest scores on the grueling physical tests all students had to undergo.