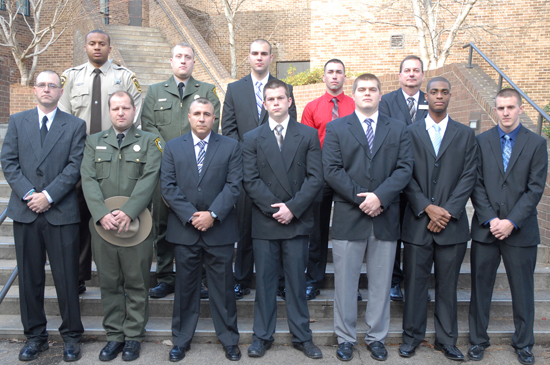 In welcoming remarks, Dr. Stelfanie Williams, the president of VGCC, said that “the 11 cadets who completed the course and passed the state exam are a tribute to the fine faculty and staff that we have here at VGCC, who all work to provide education for our community. But as a community college, we do not do this alone. We are privileged to have the support and partnership of local and state law enforcement agencies, ten of which sponsored students in this class.”

Tony Pendergrass, the VGCC coordinator of law enforcement training, praised the class for completing 624 hours of grueling training over 16 weeks. Pendergrass also thanked the 35 instructors who helped train the class, the local sheriffs, chiefs of police and administrators who support the program, and the families and friends who supported and encouraged the students.

Graduates selected N.C. Alcohol Law Enforcement agent Aaron Woodlief, a part-time instructor for the VGCC program, to be their guest speaker. Woodlief himself graduated from the BLET program in 2006. He encouraged cadets to continue their education and training, thanked them for their commitment and their future service, and said he looked forward to working alongside them as professionals.

Cadet David Jacobs, the class leader, spoke on behalf of his fellow graduates. He said that from very different backgrounds, members of the class had become a tight-knit “band of brothers.” “I’m proud and honored to have gone through this with each and every one of my brothers,” Jacobs said. “We are the 97th Vance-Granville BLET class, and we are ready!”

Pendergrass handed out awards to the top students in the class in three categories. Goldsmith earned the Physical Training Award for scoring highest in the various fitness tests the cadets undergo.  Trivette won the “Top Gun” Award for having the highest accuracy score in weapons firing. Whitlow took home the Academic Achievement Award for having the top grade average in the written tests each cadet must pass. Providing the invocation and benediction for the graduation ceremony was VGCC Male Mentoring program coordinator Dr. Tolokun Omokunde, who also serves as chaplain for the Oxford Police Department and Granville County Sheriff’s Office. For more information on the BLET program , contact Tony Pendergrass at pendergrass@vgcc.edu .