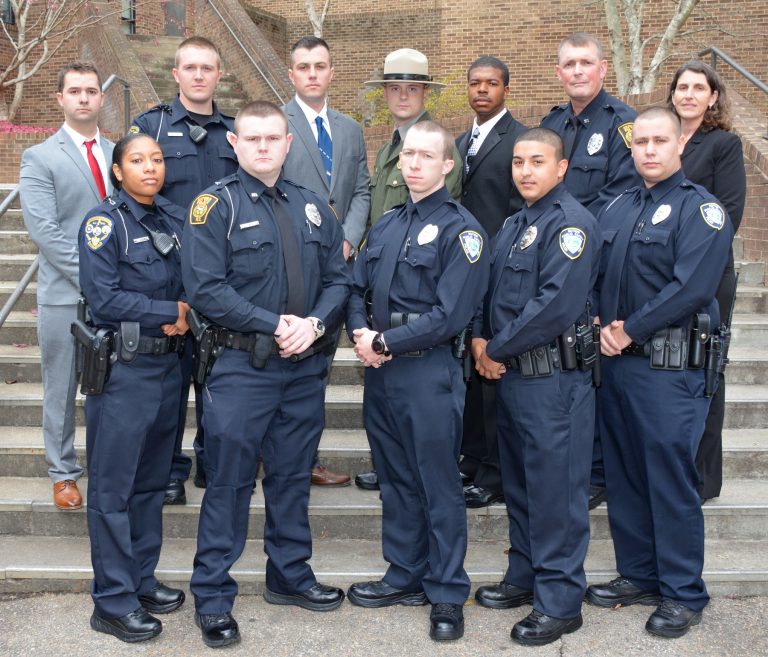 Eleven cadets graduated on Dec. 12, 2017, from the Basic Law Enforcement Training (BLET) program at Vance-Granville Community College, in a ceremony held in the Civic Center on Main Campus. After passing the state certification exam, all are authorized to work in any law enforcement agency in North Carolina.

The ceremony began with a presentation of colors by students from the ROTC program at Northern Vance High School, and the singing of the national anthem by NVHS student Jadyn Jones.

In welcoming remarks, Dr. Levy Brown, VGCC’s interim vice president of academic affairs, applauded the graduates and thanked their families for being their “support systems” during the 16-week program. Brown expressed his appreciation to all the faculty and staff who had instructed Class 105.

Speaking as leader of the class, Cadet Tyrell Perry added his thanks to the instructors. He presented a plaque on behalf of the cadets to Sgt. Richard Creech of the N.C. Wildlife Resources Commission, honoring him as an “outstanding instructor.”

Graduates selected Lt. Gregory Earp of the Clayton Police Department, one of their instructors, to serve as their featured speaker. Perry said that the cadets had appreciated and benefitted from Earp’s “witty humor and years of experience.” He has been teaching part-time for VGCC since 2005.

Earp cautioned graduates that a law enforcement career takes an emotional toll. “During the journey you are about to embark upon, you will bear witness to some of the ugliness that this world has to offer. It will leave you with scar tissue,” Earp said. Nevertheless, he told the new officers that they would also have a wide variety of career opportunities open to them. “The great thing about this profession is that you can find your passion within this job and make it your own,” he said.

Andrea Hyson, the training program coordinator, presented awards to several students. Perry received a special Leadership Award. Davis won the “Top Gun” Award for having the highest accuracy score in firearms qualification. Whitson earned the Physical Fitness Award for scoring highest in the various fitness tests the cadets undergo during physical training. Bulloss took home the Academic Achievement Award for having the top grade average in the written tests each cadet must pass.

For more information on the BLET program , contact Hyson at hysona@vgcc.edu.