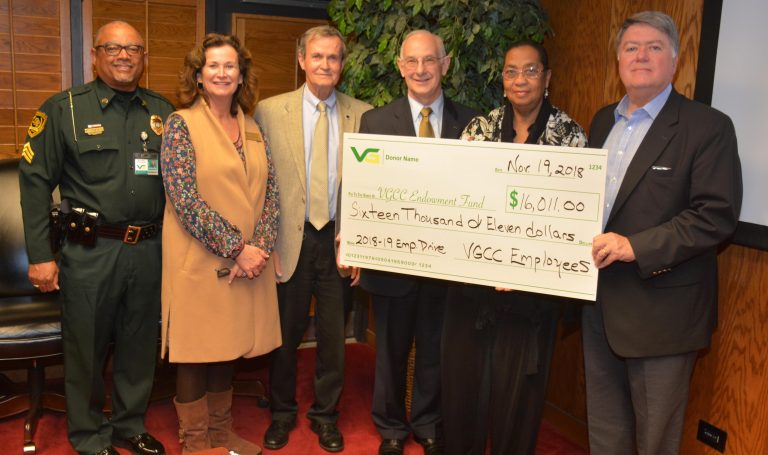 The college’s annual Faculty & Staff Drive for the VGCC Endowment Fund raised $16,011 this fall from among employees on the college’s four campuses, according to an announcement by the co-chairs for the drive to the Trustees on Monday, Nov. 19, at the board’s regular bimonthly meeting on the Main Campus.

The funds were raised to support the mission of the college and award scholarships to deserving students, said Eddie Ferguson, director of the Endowment Fund.

“Our campaign theme was ‘Rise Up!’” Ferguson told the Trustees. “It was based on the fact that every day our students rise up to come to school under a lot of hardships, whether it be academic pressure, family issues, transportation or such. We serve a very diverse community.”

The faculty and staff, he said, “rose up” with this drive to provide the funds for the students. “We are really proud to raise this money from our employees, most of which will go directly to students in the form of scholarships. Some of the money is directed to projects such as our student emergency fund to help meet other immediate needs,” Ferguson said.

(Also at the board meeting, the Board of Trustees narrowed the search for the college’s next President to three candidates. )

In his report to the trustees, Interim VGCC President Dr. Gordon Burns outlined budget priorities identified by the North Carolina Community College System (NCCCS) for 2019 through 2021 and urged the trustees to share those priorities with the returning and newly elected members of the N.C. House of Representatives and the N.C. Senate who represent the four counties served by Vance-Granville Community College.

Under the Workforce Development Legislative Agenda, NCCCS is requesting funding to help 700,000 students annually achieve a better life through high-school equivalency, career and technical education, short-term workforce training, and high quality, affordable college transfer programs, Dr. Burns said. The state’s community colleges are essential in closing the skills gap for North Carolina employers, the NCCCS notes, and are a driving force in the economy of the state.

The system office reports that the state’s 58 community colleges continue to suffer from approximately $53 million in budget cuts made during the 2008 recession that have not been restored, which undercuts efforts to prepare the state’s workforce. Dr. Burns noted, too, that community colleges are having difficulty recruiting and retaining faculty and staff because the average annual faculty salary, at $47,362, is 41st in the nation.

Among legislative priorities for 2019-2021, NCCCS is seeking recurring funds of $11.5 million to fully fund short-term workforce training; $15 million to upgrade information technology systems across the state; $2.6 million to fund workforce-focused multi-campuses; and $2.8 million to expand a program that places career coaches in high schools to assist students with determining career goals and identifying community college programs that align with the students’ goals.

In his report to the board on capital projects, Trustee Donald Seifert, chair of the Building Committee, said renovations have been completed to the seminar rooms in the Civic Center on Main Campus.

H.G. Reynolds Company began renovation of a 3,200-sqaure-foot portion of Building 10 on Main Campus to create a Practical Simulation Lab for the Basic Law Enforcement Training, Fire/Rescue and Emergency Medical Services programs. The work, which started in October, is scheduled to be completed in January. In addition to the area being renovated, parking lot space is being expanded, Seifert said.

College officials are also working with the county managers in Vance and Granville counties to fund the replacement of a storage building on the Main Campus that was lost in a fire this past summer.

● The trustees voted to approve the closure of two curriculum certificate programs and a diploma program no longer in demand from students. The closure of the Nurse Aide Certificate, Nurse Aide Diploma and the School Age Care Certificate programs, effective this fall, will go to Southern Association of Colleges and Schools Commission on Colleges and the North Carolina Community College System for final approvals. The closures came at the request of the Curriculum Committee, chaired by Trustee Barbara Cates Harris.

● Trustee Xavier Wortham, chair of the Investment Committee, reported the VGCC Endowment Fund Corporation received a favorable report from May & Place PA, certified public accountants, for the 2017-2018 fiscal year. He also gave the bimonthly update on the college’s investments.

● Trustee Sara Wester, chair of the Personnel Committee, reported on new employees, retirements and resignations, and she presented an amended employee calendar for 2018-2019.

● Student Government Association President Angel De Leon, the student Trustee, reported to the trustees on a leadership workshop recently attended by students, participation in recent Fall Festivals on the college’s campuses, and a relief drive that is being held to help victims of Hurricane Florence.

The next meeting of the Board of Trustees will held on Monday, Jan. 28.

In the photo above, VGCC’s Faculty & Staff Drive for the Endowment Fund was led by volunteers Michael Brodie, Campus Police sergeant; Antoinette Dickens, program head and instructor for Paralegal Technology; Willie Mae Foster-Hill, Main Campus receptionist; and Jeremy Lambert, assistant director of financial aid. Shown above celebrating the success of the drive at the Board of Trustees meeting are, from left, Brodie; Kay Currin, Endowment Fund specialist; Trustee Danny Wright, chair of the board; Dr. Gordon Burns, interim VGCC president; Foster-Hill; and Eddie Ferguson, director of the Endowment Fund. Dickens and Lambert were unavailable for the photo. (VGCC Photo)