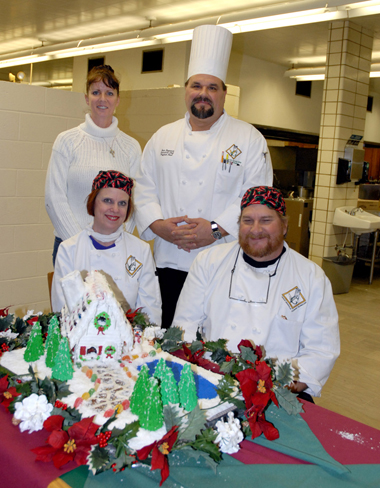 It was a feast for the eyes when the Culinary Technology program at Vance-Granville Community College held its first Gingerbread House competition on Dec. 10. Culinary students formed two-person teams to create the unique houses, which employed a variety of holiday themes and images.

VGCC’s two-year Culinary Technology degree program, based at the Masonic Home for Children in Oxford, prepares students for entry-level professional positions in restaurants, hotels, catering operations, health-care facilities, schools and other institutions. Chef Ross Ragonese, who heads the program, said that he plans to make the competition an annual event for second-year students. He gave his students only two basic guidelines: the houses had to be researched and created entirely by the students, and the houses had to be 100-percent edible.

Oxford-based baker Karen Haire, owner and operator of The Cake Lady, served as the judge for the competition. The Cake Lady, which offers a variety of desserts in addition to cakes, opened earlier this year on College Street in Oxford, just down the road from the Masonic Home.

Haire chose the team of students Cindy Snipes Boring of Oxford and Scott Cannada of Kittrell as the winners of the competition. Other students competing included Denise McLeod of Durham, Marc Cavanaugh of Oxford, David Force of Youngsville, Stephen Schandle of Creedmoor, and Alvin C. Brame and Geraldine Greene-Ramsey, both of Henderson.

“The lab sessions in our Culinary program are intense, and that intensity is reflected in this student project,” according to Bobby Van Brunt, Dean of the Business & Applied Technologies division at VGCC. “The end result was magnificent, and we are proud to be displaying the completed project in the lobby of Building 1 on our main campus.”

Ragonese said that the prize for the winners was a holiday dinner for their families.