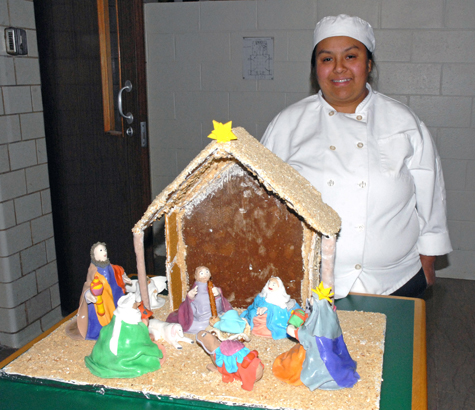 Chef Ross Ragonese, who heads the VGCC program, has used the competition as a fun, challenging exercise for his second-year students near the end of each fall semester since 2009. Each year, he gives his students only two basic guidelines: the houses have to be researched and created entirely by the students, and the houses have to be edible.

VGCC Culinary alumnus Scott Cannada of Kittrell, who as a student was on the team that won the first gingerbread house competition, served as the judge for this year’s contest.

Cannada chose Leticia Mendez of Durham as the winner. Her “house” actually included a Nativity scene. Shannon Hayes of Creedmoor came in second in the contest, while Amber Williams of Oxford won the third-place prize. Other students competing included Kevin Fabretti of Creedmoor; Joshua Boney of Durham; Tonya Pendergrass of Granville County; Brandon Brown, Natalia Clark and Rodney Yancey, all of Henderson; Natalie Bailey, Kevin Hartman and Tracey Washburn, all of Oxford; Kevin Zeher of Raleigh; and Thomas Henderson of Warrenton.

Ragonese said that the prize for the winner was a $100 dollar shopping spree at Just Save Grocery Store in Oxford.